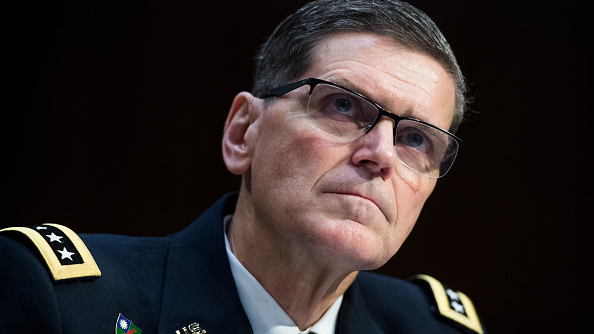 Tom Williams/CQ Roll Call via Getty Images(WASHINGTON) — The commander of U.S. troops in the Middle East warned against the "calculated" retreat of ISIS fighters from the last territory held by the group in eastern Syria.
Gen. Joseph Votel, the head of U.S. Central Command, told Congress on Thursday that the exodus of thousands of ISIS fighters and their families is not a surrender, but a decision to retreat to camps and remote areas in the region until they can reconstitute as a violent extremist organization once again.
"While ISIS has been battered by the Syrian Democratic Forces and coalition forces, we should be clear in our understanding that what we are seeing now is not the surrender of ISIS as an organization but a calculated decision to preserve the safety of their families and preservation of their capabilities by taking their chances in camps for internally displaced persons, and going to ground in remote areas and waiting for the right time for a resurgence," Votel told the House Armed Services Committee.
ISIS now holds "less than a single square mile" of territory in the city of Baghouz out of "an area of 34,000 square miles which they once controlled," Votel said.
Syrian Democratic Forces (SDF), backed by the U.S.-led coalition, resumed the offensive on Baghouz last Friday after they had paused for more than a week to allow an estimated 10,000 civilians and ISIS families to leave the town. A victory by the SDF could be declared as early as next week.
Video taken on Thursday showed hundreds of ISIS fighters voluntarily handing themselves over to the SDF. Votel called the men and women leaving the last ISIS pocket "unrepentant, unbroken and radicalized."
The SDF holds over 1,000 ISIS foreign fighters, along with thousands from Iraq and Syria. The U.S. is pushing for them to be returned to their home countries, but that effort has, so far, been met with mixed success.
"The broader international community will need to determine how we deal with the thousands of fighters and family members now being held and safeguarded by the Syrian Democratic Forces," Votel said. "In my view, this is a serious generational problem that if not handled properly will sow the seeds of future violent extremism."
Administration officials have said options for foreign fighters who cannot be repatriated include the U.S. detention facility at Guantanamo Bay, Cuba.
In the meantime, the U.S. will proceed with the planned withdrawal of about 2,000 troops from Syria, first ordered by President Donald Trump in December. That decision was met with surprise and outrage by U.S. partner forces and members of Congress who expressed concerns about what a U.S. withdrawal would mean for the long term security and stability of the region.
Since then, the White House has revised a complete withdrawal and will now leave a residual force of hundreds of U.S. troops in two areas of Syria which Votel said will allow the military "to continue our mission and safeguard our interests."
Last month, the general revealed he was not consulted by Trump before the president announced the Syria withdrawal.
On Thursday, Votel conceded that Russia viewed the U.S. decision to withdraw "positively" because it "solidified" their role in the Middle East and "gave them the opportunity to fill the void."