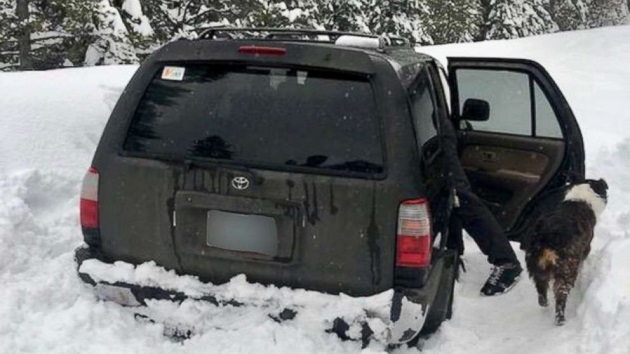 Deschutes County Sheriff's Office(SUNRIVER, Ore.) — An Oregon man said he was grateful to be alive on Thursday as he explained how he managed to survive for five days eating only taco sauce while stranded in the snow.
Jeremy Taylor, 36, said three packets of Taco Bell's fire sauce helped save his life last week when he and his dog, a 2-year-old Australian shepherd named Ally, got stuck on a snowy road near Sunriver, Oregon, without food.
"As soon as it got dark, it became pretty apparent that I wasn't going to get myself out. I didn't have a phone with me and I didn't have a real shovel," Taylor said in an interview airing Thursday on ABC News' Good Morning America. "The vehicle was hot when I parked it, so it kind of sank down and melted the snow a bit. There was really no coming out of that."
Taylor said he was heading home on Feb. 24 at around 6 p.m. when his Toyota SUV got stuck on a forest service road. He decided to spend the night inside the vehicle, with hopes of awaking to better conditions — but the weather never improved.
"Instead of taking my road, I ended up going a little farther up than I should have and I got stuck," Taylor said. "I almost got myself out with a hammer and a hard hat, digging, but it started getting pretty cold, started getting dark and I just figured I'd come at it with fresh eyes in the morning. … The rest is history."
"I just thought I would be easier to deal with in the morning, but I was wrong," he added.
He said he woke up the next morning and found even more snow on the ground. He tried to walk out with his dog, but the snow was too deep and they were forced to return to the vehicle.
"At that point all I could really do was just try to figure out what I could do to get out of it. Just walking around in that snow every step you take you're going up almost to your waist. It was pretty deep snow," he said.
Taylor said he stayed warm over the next four days by starting his car every now and then and using taco sauce packets as food.
"My plan was to hike out," he said. "We made it about 3 miles, but by that point Ally had gotten so cold. She had snow stuck all in her fur and you could tell she was just miserable."
"I started carrying her, but the extra weight of her and just being kind of awkward — every step just being off balance with her on me — made it pretty much impossible, so we decided to turn around and go back to the truck," he added.
Ally had "a little bit of dog food" to hold her over, but Taylor said he didn't have anything. He said his eyes lit up when he found some Taco Bell sauce in the door.
"It was just three little packets of fire sauce and that was for sure like the only thing in the truck," he said. "When you have nothing, even hot sauce is going to feel like something."
He said he discovered the sauce packets on Wednesday and said he "made them last."
"I had one a day. I don't mind spicy foods, but I don't think three hot sauce packets real quick are going to be good for anyone, especially when all you have is melted snow water to wash it down with," he said. "It was more just peace of mind more than anything else. I don't think there's any real nutritional value there, if you really look into it."
The two were stranded for five cold days until a snowmobile rider discovered them on Friday afternoon and called the police.
Taylor and Ally were taken to an intersection where he was reunited with family and friends.
He gave thanks on Facebook after his rescue to Taco Bell, which offered him a care package and a year’s supply of tacos in the wake of the incident.
"I just want to make sure people that know this isn't a typical outcome. This is really fortunate," he said. "I went completely unprepared. There were a lot of mistakes made to get myself into that spot. The only thing I thing I think I did right was staying with the car once I realized that I couldn't make it out."
"You're gonna have a much better chance of staying warm, dry and surviving in a situation like that if you're in your vehicle," he added.

How life has changed 1 year into the COVID-19 pandemic: Masks, restrictions largely endure
When will life return to normal? Experts consider what summer, fall might look like
Hail and snow hit Southern California, Northeast sees another cold blast
Major flooding continues South as new storm to bring snow to California, Southwest
“You could save a life” – Dr. Oz urges people to learn CPR after saving a man at airport
Golden Globes 2021: ‘The Life Ahead’ takes home Golden Globe for Best Original Song