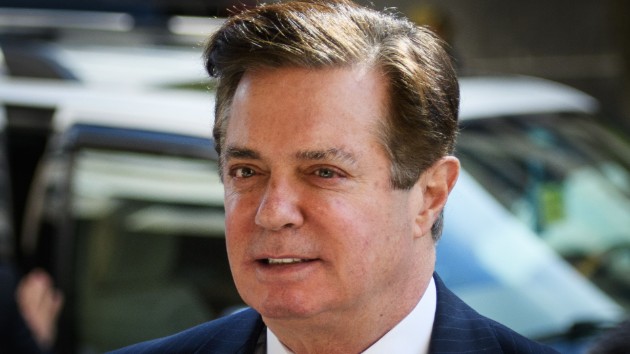 MANDEL NGAN/AFP/Getty Images(WASHINGTON) — A federal judge on Thursday sentenced Paul Manafort to nearly four years in federal prison for crimes related to tax and bank fraud in the first of two sentencing hearings for the onetime Trump campaign chairman, a term substantially less than prosecutors sought.
U.S. District Judge T.S. Ellis’ decision came more than a year after special counsel Robert Mueller secured an 18-count indictment against Paul Manafort on charges related to tax and bank fraud.
A Virginia-based jury found Manafort, 69, guilty on eight of those counts after a lengthy trial in August 2018, setting the stage for the hefty upcoming prison term.
In a flurry of court documents filed over the past month, special counsel prosecutors and Manafort’s defense team sparred over what penalty would be appropriate for his crimes.
The special counsel's office advocated for a lengthy prison term in line with the findings of an independent pre-sentencing report, which calculated that Manafort's crimes called for a prison sentence of up to 25 years. In response, defense counsel for Manafort sought a term "substantially below" sentencing guidelines, citing their client's age and health.
Judge Ellis said Thursday he found those sentencing guidelines “excessive” and “quite high.”
Arriving at court this afternoon, a wheelchair-bound Manafort donned a green jumpsuit with a cane in hand. He managed to stand up under his own weight when Judge Ellis entered the courtroom.
Nearly three hours into his sentencing hearing, Paul Manafort made a direct pitch to Judge Ellis to show “compassion” in his sentence and sought to describe the burden his actions have taken on his family.
"My life – personally and professionally – is in shambles…The last two years have been most difficult my family has experienced,” he said. “This is an ordeal I am responsible for…I ask for your compassion.”
Despite Ellis’ decision, Manafort's legal travails are far from over. He faces another sentencing next week in Washington. He pleaded guilty to those additional federal charges brought by the special counsel’s office in September 2018.
Manafort, a longtime lobbyist and Republican political operative, led President Donald Trump's campaign for five months, from May to August 2016.
Now that he has been sentenced to prison, Manafort's former boss could be his saving grace. In November, Trump told the New York Post that though a pardon for Manafort had never been discussed, he "wouldn't take it off the table."
Copyright © 2019, ABC Radio. All rights reserved.