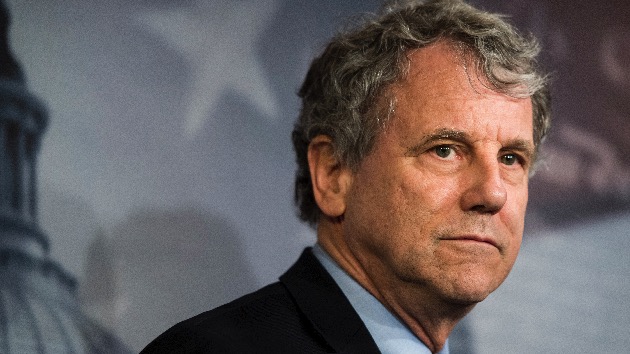 Bill Clark/CQ Roll Call(WASHINGTON) — Ohio Sen. Sherrod Brown announced Thursday that he will not run for president in 2020, making him the latest Democrat to decide against a presidential bid as the party's field vying to unseat Donald Trump continues to take shape.
"Connie and I have spent the last few months traveling around the country to make dignity of work a centerpiece of Democrats’ 2020 campaign, and we are so grateful to everyone who has welcomed us into their communities and into their lives," Brown wrote in a statement released Thursday.
"We’ve seen candidates begin taking up the dignity of work fight, and we have seen voters across the country demanding it – because the dignity of work is a value that unites all of us. It is how we beat Trump, and it is how we should govern. That’s why I’m confident it will continue to be a focus for Democrats in 2020, and I plan on making sure that happens," Brown continued.
"I will keep calling out Donald Trump and his phony populism. I will keep fighting for all workers across the country. And I will do everything I can to elect a Democratic President and a Democratic Senate in 2020. The best place for me to make that fight is in the United States Senate," Brown concluded.
In an interview with ABC News on Capitol Hill Thursday, Brown said that his decision was not influenced by the looming announcement of former Vice President Joe Biden, who said last month that he is in the "final stages" of a presidential bid decision.
"No. Zero. His getting in or out had zero impact on this," Brown told ABC Congressional Correspondent Mary Bruce. "I talk to him from time to time … I have not talked to him about this."
Asked if he thinks Biden would be a good candidate to carry on his "dignity of work" message, Brown did not offer any speculation.
"I think that any number of candidates who have announced or not yet announced can, if they carry on the message of the dignity of work and advocating for all workers … I think any number of them can win," Brown said.
Brown described his announcement as a "personal decision," saying "This is a decision I’m very comfortable with. It was the right decision."
"I’ve never had this ambition," he added. "It was an attractive option to do this and I thought there was an absolute path for me as a progressive Democrat who talks to workers as the most pro-labor member of the Senate. And I thought there was an absolute path. but I’m choosing this because I think I can do better here."
Brown's announcement comes during a week that has seen several prominent names opt out of a 2020 presidential bid, including 2016 Democratic nominee Hillary Clinton, former New York City Mayor Mike Bloomberg, and Oregon Sen. Jeff Merkley.
The comments from Brown came after he gave a typically energetic speech on the Senate Floor Thursday urging the body to reject one of President Trump's judicial nominees.
"Heck, Madame President, the White House looks like a retreat for Wall Street executives!" Brown said, urging the Senate to reject Eric Murphy, a former Ohio solicitor, President Trump's nominee for the 6th U.S. Circuit Court of Appeals.
The decision from Brown, a fiery populist who has represented Ohio in Congress since the early 1990s, may come as a surprise to many in the party who believed he was well-positioned to win back states in the Midwest lost to Donald Trump in the 2016 election.
Brown, 66, won re-election to the Senate by nearly seven points in 2018, further bolstering his position as an electable Democrat in a swing state where Trump has a proven base of support.
The Ohio senator's decision not to mount a White House bid may boost the fortunes of other candidates. including Sen. Bernie Sanders, who has also positioned himself as a working-class champion, and Sen. Amy Klobuchar, who is emphasizing her appeal in the Midwest early in her campaign.
While he definitively ruled out a presidential campaign in 2020 on Thursday, Brown has made recent visits to early voting states on his "Dignity of Work" tour, with stops in Iowa, South Carolina in Nevada where he touted his pro-union, pro-worker message.
But even as he spoke passionately about protecting American workers, Brown has shown a hesitation to embrace the major policy ideas put forth by members of the party's more progressive wing like Medicare-for-all and the Green New Deal.
At a breakfast hosted last month by the Christian Science Monitor, Brown said he will not take a position on a proposed 70 percent tax on high-income earners, or the "Green New Deal," just because "some people with a lot of big ideas are proposing" things like that.
He also won’t take a firm stand on Medicare-for-all proposals being put forward by 2020 candidates, saying he has long believed in “universal coverage” but wants to build on Obamacare rather than starting from scratch. For now, he said, he favors Medicare buy-in for people 50 years old-plus, with Medicare-for-all being something that maybe "eventually" should happen.
"I want to get something done" on health care, he said.
Copyright © 2019, ABC Radio. All rights reserved.