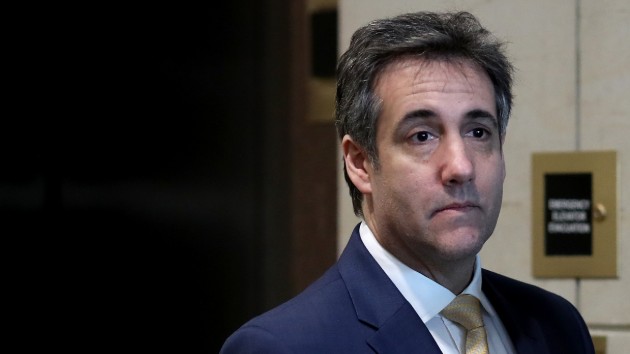 Cohen asked his attorney at the time, Stephen Ryan, to meet with Rudy Giuliani about the possibility of a pardon shortly after an FBI raid on his home and offices in the early summer of 2018, Davis said.
Davis added that Cohen also stands by his testimony, citing the time frame. Cohen, at the time, was part of a joint defense agreement with the president and many of his advisers.
He later left the JDA when he decided to "change his life and tell the truth" about the president, when he decided to "put family and country first," as Cohen told ABC News' George Stephanopoulos at the time.
"We stand by [Cohen's] public testimony before Oversight Committee as referring to post-JDA time frame statement. He authorized me after July 2 to say he would never accept a pardon if offered and I did. That is the post-JDA Michael Cohen, committed to change his life and tell the truth," Davis told ABC News overnight.
Davis' revelation appears to contradict testimony Cohen provided to the House Oversight Committee last week.
"I have never asked for it, nor would I accept a pardon from President Trump," Cohen told the panel in his opening statement.
Davis pointed to nuances in Cohen's testimony last week, including the language used in asking the question.
"But the sentence was also literally true," Davis argued. "[Cohen] never asked President Trump for a pardon. His lawyer explored the disingenuous 'dangle' repeatedly floated by Rudy and Trump in one meeting and never followed up."
The Wall Street Journal and Washington Post earlier reported Davis' statement.
Cohen pleaded guilty late last year to charges including campaign finance violations, tax fraud and lying to Congress. He was sentenced in December to three years in prison, and his term is expected to begin May 6.