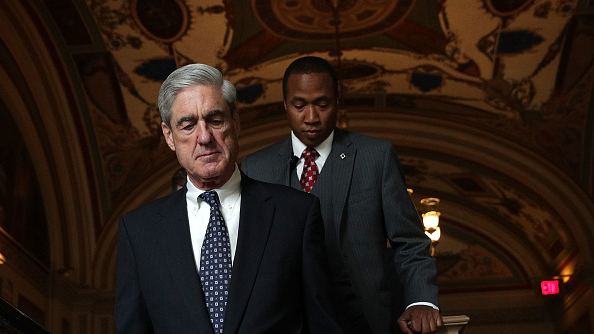 Alex Wong/Getty Images(WASHINGTON) — Special counsel Robert Mueller's team argued Thursday that if it's forced to hand over millions of "sensitive" documents to Russian individuals as part of court proceedings, Russia could mine the material for operational secrets and use them against the U.S.
Prosecutor Jonathan Kravis made the argument at a pre-trial hearing for a case against a Russian firm accused of funding a St. Petersburg troll farm that allegedly conducted a widespread propaganda and disinformation campaign ahead of the 2016 U.S. presidential election.
Kravis said that while most of the 3.2 million "sensitive" documents that have been collected in discovery for the case were relatively innocuous on their own, a shrewd reading of the whole lot could reveal important U.S. investigative secrets.
It might be possible, for instance, to determine from the information the government has what information the government does not have — the "gaps in the coverage." One could also potentially use the information available to "recreate the steps of the investigation," Kravis said.
"That information, used by a foreign adversary, could be used to avoid detection in the future," he told the court.
The argument is the closest the government has come yet to articulating a concern that legal and national security experts shared with ABC News back in October. They said then that Russia might be using the U.S. court system to gather intelligence on Mueller's investigation or other U.S. secrets through the discovery process.
Prosecutors say the Russian firm, Concord Management and Consulting, is controlled by Yevgeny Prigozhin, an associate of Russian President Vladimir Putin. Previous court filings from the Mueller team indicate they're concerned that sensitive information provided to any officers of Concord, including Prigozhin, for its defense could take a detour to Moscow.
Concord is the only one of three Russian businesses and 13 individuals, including Prigozhin, charged by the special counsel in the troll factory case to answer the accusations in court. The firm has pleaded not guilty to a fraud-related charge and has mounted a spirited pre-trial defense through the American law firm Reed Smith.
All of the Russian individuals charged in the case are believed to be in Russia, beyond the reach of U.S. law enforcement, but U.S. law allows a corporate entity to defend itself without any individual officers ever being in court.
Early in the case U.S. District Judge Dabney Friedrich placed tight restrictions on discovery in the case, including provisions that the sensitive material had be housed at Reed Smith offices in the U.S. and could not be shared with individuals in Russia. A so-called "firewall counsel" was appointed to help determine what information could be shared with whom.
But for months Mueller's team and the defense have tussled in various motions over the question of sharing information.
Concord's lead attorney, Eric Dubelier, has vehemently argued that it would be virtually impossible to mount an effective defense without being able to show — or even discuss — the millions of documents of potential evidence with any actual officers of Concord in Russia. He said the government’s labeling of the millions of documents as “sensitive” was overly broad.
Dubelier said Thursday that if the government didn't think that many of the 3.2 million "sensitive" documents were actually that sensitive on their own, they should go back and reclassify them.
He also said idea that Concord officers would come to the U.S. to view the documents, which is allowed by the judge's restrictions, was a "non-starter." Prigozhin, for example, presumably would be arrested the moment he set foot in the U.S. since he's a co-defendant in the case.
Dubelier indicated that he has made a sealed filing suggesting a secure way to share information with individuals in Russia — a matter that the Friedrich said the court would discuss in a closed session that immediately followed the public hearing on Thursday.
Kravis said the government was willing to work with the defense to identify documents or groups of documents they’d be willing to share, and to redact some information more closely related to the investigative process – like search warrant information or metadata on some documents.
Whatever the outcome of the closed hearing, it appeared that after months of wrangling the two sides still had a long way to go to finding an agreement on the discovery question. No trial date has been set.
U.S. intelligence officials have warned that online influence campaigns emanating from Russia have continued long after the 2016 election and are expected to continue into the race for 2020.