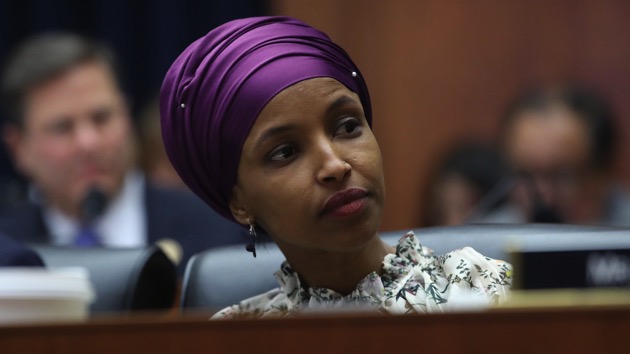 Mark Wilson/Getty Images(WASHINGTON) — The House of Representatives will vote Thursday day on a resolution “opposing hate,” House Majority Leader Steny Hoyer announced Thursday morning, as Democratic leaders hoped to end their caucus’s first major internal fight of their new majority.
Party leaders worked this week to negotiate a compromise over how to handle a resolution condemning anti-Semitism, initially crafted with the intent to soothe members offended by Rep. Ilhan Omar, who faces a new wave of criticism for ostensibly perpetuating stereotypes against Jews.
Omar, a freshman Democrat from Minnesota who made history as one of the two first Muslim women elected to Congress, refused to answer a series of open-ended questions on the controversy when ABC News caught up with her inside the Capitol on Wednesday morning.
In a week in which House Democrats are celebrating their new power by voting on sweeping anti-corruption legislation, the controversy created a distraction that tested the patience of leadership.
A senior Democratic leadership aide said that Majority Whip James Clyburn implored the caucus to vote Thursday in order to “inoculate” Democrats from a procedural vote on HR 1, where Republicans could have forced a vote on their own version of a resolution, which specifically called out Omar while condemning anti-Semitism.
Although leaders had circulated vanilla text earlier this week to their members recapping the history of anti-Semitism and concluding that Congress rejects it — and even though the draft resolution did not directly name Omar — in a political environment deeply mired by political incorrectness, some Democrats felt it was inappropriate to single out Omar even indirectly, fighting to amend the text to add language that rejects Islamophobia and racism as well.
With a vote now anticipated on a broadened resolution condemning the full spectrum of hate, the caucus appears ready to move past the unsavory debacle.
A vote initially had been anticipated on a resolution narrowly rejecting anti-Semitism as early as Wednesday but was delayed after House Democratic leaders reopened the text of the resolution on Tuesday evening to appease members of the Congressional Black Caucus and Congressional Progressive Caucus who threatened to derail the vote.
Copyright © 2019, ABC Radio. All rights reserved.