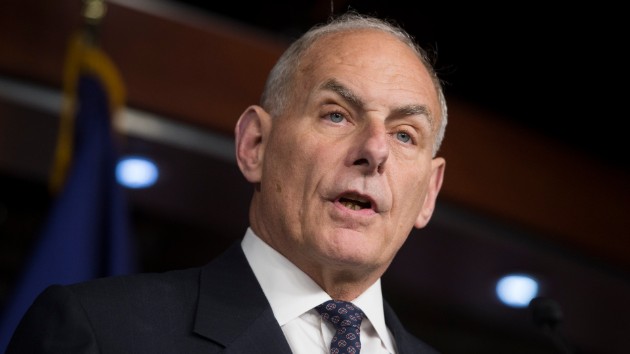 SAUL LOEB/AFP/Getty Images(WASHINGTON) — Questioned about reports that he was ordered by President Donald Trump to approve security clearances for his son-in-law Jared Kushner and daughter Ivanka, former White House chief of staff John Kelly said on Wednesday he couldn’t talk about it.
“I couldn’t comment on that for a couple reasons. Number one, someone’s security clearance is something I can’t talk about. Two, conversations with the president at that level certainly would be covered by privilege,” Kelly said according to an audio recording provided to ABC News of remarks he made at Duke University Wednesday night.
The New York Times reported last week that Kelly was ordered by the president to approve Kushner's clearance and that the then-chief of staff was troubled by the command and wrote a memo about it about the time.
Kelly declined to say whether he had ever written such a memo.
“I’d prefer not to talk about that,” Kelly said.
He did not comment on the reports except to say, “I believe the press does the best they can to get the stories that will become popular, or whatever, they’re not always true.”
Critiques of the media aside, Kelly said that he read the major papers and news sites every morning because, depending on what was reported, it could have a major impact in shaping his day.
“I had to read all that because that would be a big part of my day, whatever was in there because there was some startling there,” Kelly said.
A student followed up later in the discussion to further question Kelly’s morning reading, asking whether he spent more time managing the message or managing the government.
"I did my best to manage the government,” Kelly replied.
“Did the president ever ask you do something or order you to do something that you said, I’m not going to do that?” the moderator asked Kelly at one point.
Kelly paused for some time, as if in contemplation about his answer, and evoked laughter from the audience.
“I never had to recuse myself from anything,” Kelly said, and went on to explain the “routine” process of getting White House lawyers involved for consultation should the president desire to do something that might be beyond his authority.
Kelly said he has no regrets from his time in service to President Trump but also said that, had Hillary Clinton won the election and asked to serve in her administration, he likely would have also said yes.
“If I’d gotten called, if Hillary Clinton had won and she had called me and said I really need a good chief of staff here, I would have probably would have done it … politics aside, it’s about governing the country,” Kelly said. “Love them or hate them, whoever that happens to be, it’s our responsibility to help them.”
Kelly offered some critiques of the administration's immigration policies, saying he doesn't believe a southern border wall is needed “from sea to shining sea” and placed blame on former Attorney General Jeff Sessions for the family separations that resulted from the administration’s “zero tolerance” policy. He said the policy was implemented by Sessions and caught other government agencies off guard, leaving them reeling as they sought to respond and catch up.
He was also critical of the decision to deploy troops to the border, citing his own experience in the military and saying that no one in the military wants a domestic deployment except in the rare case of a major natural disaster.
“To be on the streets and be interacting domestically is something that most American military I would say all Americans would prefer not to do. The calling of the National Guard Title 32 their kind of law enforcement role is much more appropriate,” he said.
Copyright © 2019, ABC Radio. All rights reserved.