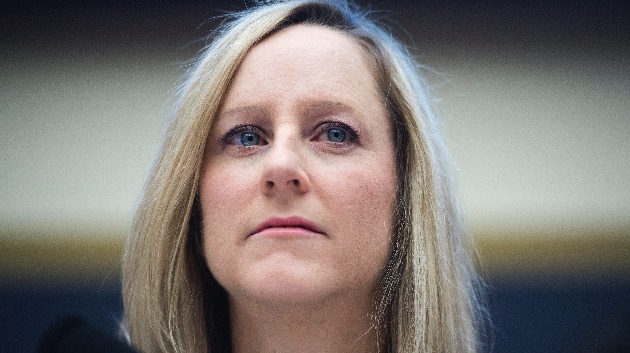 Tom Williams/CQ Roll Call(WASHINGTON) — The director of the national federal consumer watchdog faced a grilling by House Democrats Thursday who say that the Consumer Financial Protection Bureau has failed to perform its function under leadership appointed by the Trump administration.
Kathy Kraninger, who took the helm of the CFPB in December, faced criticism from the House Financial Services Chairwoman Maxine Waters for steps that Waters said she her predecessor, Mick Mulvaney, took to defang the bureau.
"I'm committed to reversing the damage that Mulvaney caused," Waters said. "And ensuring that the consumer bureau can continue its important work."
But Republicans on the committee applauded the steps Kraninger has taken in her new role. Ranking member Patrick McHenry said Kraninger's leadership has eased concerns Republicans held about the previous overreach of the bureau since its inception.
"Our concerns were driven by the fear that Congress was creating one of the most powerful and unaccountable bureaucracies ever. Unfortunately, we were right," McHenry said. Though under Kraninger, McHenry said, "It is a new day at the CFPB."
Since Waters took control of the House Financial Services Committee at the start of the year, she's outlined consumer issues as a significant priority for the committee. A key focus for Waters is undoing many of the regulatory measures taken at the CFPB by its former acting director, Mick Mulvaney.
Kraninger pushed back during the hearing on questions about whether her decisions were impacted by Mulvaney or President Trump.
"The decisions that I take at the bureau are my decisions," Kraninger said. She said she has not spoken to Trump since she began leading the agency and has only seen Mulvaney socially.
Mulvaney declined a request from the committee for testimony at Kraninger's hearing Thursday, according to Waters.
"This committee still has serious questions for him, so I'm expecting our new director to answer for him," Waters said of Kraninger.
Mulvaney was replaced by Kraninger as acting director for the CFPB in December, a role he held concurrently with his former position leading the Office of Management and Budget. He now serves as President Donald Trump's acting chief of staff.
While at the agencies helm, Mulvaney, an outspoken critic of the CFPB dismissed an advisory board, dropped several significant enforcement actions against payday lenders, and at one point asked for a zero dollar appropriation to fund the agency.
The CFPB was created after the 2008 financial crisis as a way of regulating banks and other financial institutions.
During a press conference Wednesday to reintroduce consumer watchdog legislation, Waters said she had so far only had an "informal meet and greet" with Kraninger and intended to use Thursday's hearing to determine whether or not Kraninger was "on the road to repairing" the watchdog bureau.
Kraninger's appearance before the committee was is her first since taking the reigns of the agency. Her appointment in December marked the end of a controversy over bureau leadership and brought with it fierce criticism from Democrats and consumer watchdog groups.
During her relatively short tenure, Kraninger has brought five enforcement actions.
She has also announced the bureau's plans to reconsider a rule that would've prevented payday lenders from issuing loans to borrowers who could not demonstrate an ability to repay, a move met with criticism by groups who allege that Kraninger is continuing Mulvaney's deregulatory policy.
Copyright © 2019, ABC Radio. All rights reserved.