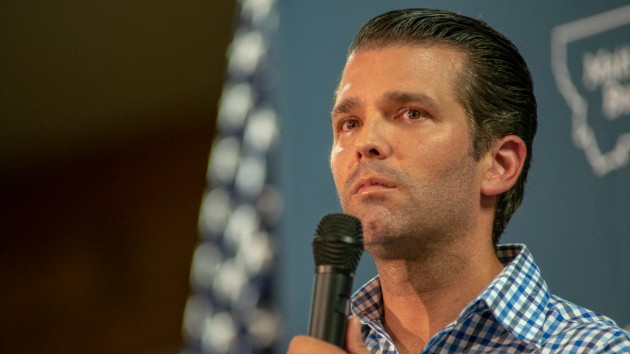 William Campbell-Corbis via Getty Images(WASHINGTON) — Congressional investigators are making plans to ask Donald Trump Jr. to return to Capitol Hill, in part, to ask why he told lawmakers under oath that he knew "very little" about a deal with Russian developers in 2016 to put the Trump brand on a skyscraper in Moscow, sources familiar with the matter told ABC News.

Sworn testimony from the president's eldest son appears to conflict with testimony from former Trump Organization attorney Michael Cohen, who has told lawmakers in both closed and open sessions that he kept Trump Jr. and Ivanka Trump briefed about the Moscow project, the sources said.
"Do you recall how many of these briefings there might have been?" Cohen was asked by Rep. Stephen F. Lynch, D-Mass., during the Feb. 27 public hearing before the House Oversight Committee.

Two sources, from different congressional committees, told ABC News that lawmakers noticed the discrepancy between testimony from Trump Jr. and Cohen, and are planning to seek clarification from Trump Jr.'s attorney.
Alan S. Futerfas, who represents Trump Jr., declined to comment when asked about Cohen's suggestion that the two Trump children were amply briefed on the subject.

Sources close to Trump Jr. told ABC News he stands by his September 2017 testimony before the Senate Judiciary Committee in which he said he was only "peripherally aware" of the Moscow tower deal.

"Most of my knowledge has been gained since as it relates to hearing about it over the last few weeks," Trump Jr. said, according to published transcripts.
It's unclear whether or how the committees will assess Cohen's indications that he briefed the president's eldest daughter, Ivanka Trump. She has not previously testified before Congress on the matter.

President Donald Trump, and those close to him, have for weeks been highly critical of Cohen. The president accused him in a tweet of "lying in order to reduce his prison time."
Cohen pleaded guilty to financial crimes, campaign finance violations and lying to Congress, and he's preparing to serve a three-year prison sentence.
Legal experts told ABC News that congressional committees often ask witnesses to return if there are questions about their testimony.
"Traditionally, Congress asks the witness to come back before the committee to face a more focused and detailed line of questioning and to clarify and provide more context to their previous testimony," said Bryson Morgan, who served as investigative counsel to the U.S. House of Representatives Office of Congressional Ethics from 2013 to 2015. He is now in private practice at the firm Capilin and Drysdale in Washington.
Experts said it can be difficult to prove someone intended to mislead Congress, especially when it is one person's word against another's.

"You have to have other people who could corroborate what Michael Cohen is saying," said Peter R. Zeidenberg, a former federal prosecutor, now in private practice at the Washington firm Arent Fox.

Or there would need to be additional evidence, he added, such as email or text traffic involving Trump Jr. in which he indicates knowing more about the Moscow project.

"That he was paying attention — that he was interested," Zeidenberg said.
Copyright © 2019, ABC Radio. All rights reserved.