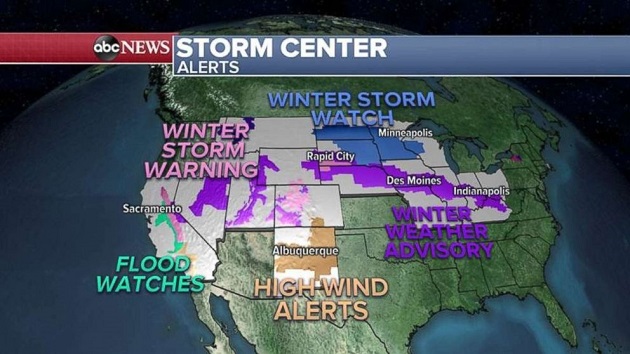 ABC News(NEW YORK) — A western storm will cross the country and explode in the central U.S. over the weekend, producing severe storms again in the South one week after tornadoes killed more than 20 people in Alabama.
To the north, winter storm watches have been posted for most of the Upper Midwest with up to a foot of snow possible.
Ahead of the storm, 19 states are under snow, flood and high wind alerts from California to Ohio. The storm produced more than 4 inches of rain in parts of central and southern California, and over 2 feet of snow in the Sierra Nevadas.
The storm was still in the West on Thursday morning, moving through the Sierra Nevada Mountains and the Rockies. It will continue to move through the Rockies Thursday night into Friday and deliver several feet of snow.
The storm will move into the central U.S. on Friday night into Saturday morning and will redevelop, strengthen and explode into a severe weather outbreak in the South with possible tornadoes and near blizzard conditions to the north. The storm will move into the Northeast by the weekend with mainly rain, but some snow possible in New England.
Arctic cold ending, milder days ahead
After some of the coldest air so far this winter and numerous record lows for the Midwest, the Great Lakes and the South, the arctic blast is ending and cold air will lift back to Canada.
Thursday morning is the last morning of really cold temperatures all the way south to Florida.
Finally, milder air will arrive in the Midwest and the Northeast by the weekend. Temperatures will be in the 40s in New York City and Chicago and near 50 in Cleveland and Washington, D.C.
Copyright © 2019, ABC Radio. All rights reserved.