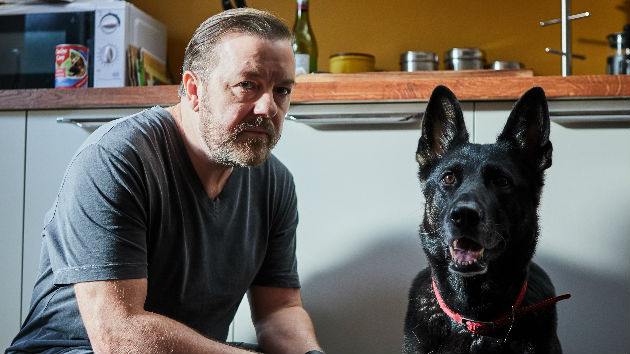 Netflix/Natalie Seery(NEW YORK) — In Ricky Gervais' new Netflix series After Life, he plays a man who decides he's got nothing to lose after losing his wife, so the widower vows he's no longer going to hold his tongue.

However, his chat with Kelly Ripa and Ryan Seacrest on Live with Kelly and Ryan Thursday proved the show — which he created, directed, and stars in — features a character who isn't too far from his own sometimes prickly self.

The Office co-creator had a laundry list of grievances, from staying in shape to noisy people. He explains that he takes earplugs with him wherever he goes — even in restaurants. "My girlfriend Jane says, 'That's sociable,'" he quipped. As for why? "Just in case there's someone slurping soup," he said, recalling a recent politeness foul.

"So there we were in a restaurant in San Francisco. A lovely restaurant. And the waiter kept doing this," he said, snorting as if he had a stuffed nose. "And I kept looking at him, and Jane says, 'He doesn't know why you're looking at him.'"

One thing that doesn't bother Ricky, however, is dogs. The animal rights activist also shares that sentiment with his character in the dramedy, who is "convinced" not to kill himself because he had to feed his pooch.

"I just can't wait to meet dogs," he enthuses. "I love dogs. Dogs are amazing. Dogs make me feel better. They cheer me up for the day. A dog can never annoy me like a person. If a dog eats noisily I go 'Aww, look at him.' If a person [does it], I go, 'What are you — are you mental?'"

After Life debuts on Netflix Friday.

‘Raya and the Last Dragon’ star Kelly Marie Tran says seeing its diverse cast in animated form was “really special”
How life has changed 1 year into the COVID-19 pandemic: Masks, restrictions largely endure
NFL star Aaron Rodgers says ‘being a father’ is his ‘next great challenge’
When will life return to normal? Experts consider what summer, fall might look like
Regé-Jean Page to star alongside Chris Evans and Ryan Gosling in new movie
‘Degrassi: The Next Generation’ star Jahmil French dead at 29