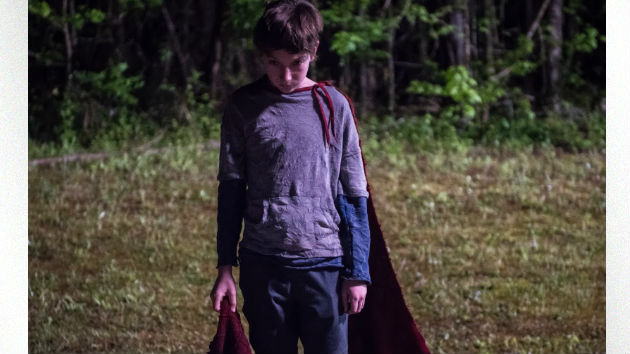 Photo: Boris Martin/Courtesy of Sony Pictures ©2018 CTMG, Inc. All rights reserved.(NEW YORK) — James Gunn was the writer and director of the Guardians of the Galaxy series, until a series of years-old tasteless tweets led to his ouster at Marvel Studios. He's now taken his talents to Sony Pictures, and created a twisted take on the superhero genre called Brightburn.

The teaser for the film he produced give us a glimpse of a Superman-like premise: A being from beyond the stars falls to earth, where two humans from the American heartland raise him as their own. Like young Clark Kent, Brightburn's young Brandon Breyer has superhuman powers, but instead of becoming a hero to mankind, he evolves into something more sinister.

Pitch Perfect's Elizabeth Banks and The Office's David Denman play the parents of the boy, who, as the trailer teases, quickly discovers the horrifying potential of his super-strength, heat vision and ability to fly.

The movie, which was co-written by Gunn's brother Brian Gunn and their cousin Mark Gunn, and directed by Guardians of the Galaxy actor-turned filmmaker David Yarovesky, opens May 24.

A third stimulus check could be coming. Here’s what Americans did with the others
Disney+ announces release dates for ‘Star Wars: The Bad Batch’, ‘Loki’, and more
$3,300 withdrawn from Grampian man’s checking account
See Emma Stone transform into a Disney villain in first ‘Cruella’ trailer
Check out Vudu’s Valentine’s Day playlist, and the most popular romantic movies by state
‘The Mighty Ducks: Game Changers’ on Disney+ gets 1st-look teaser trailer