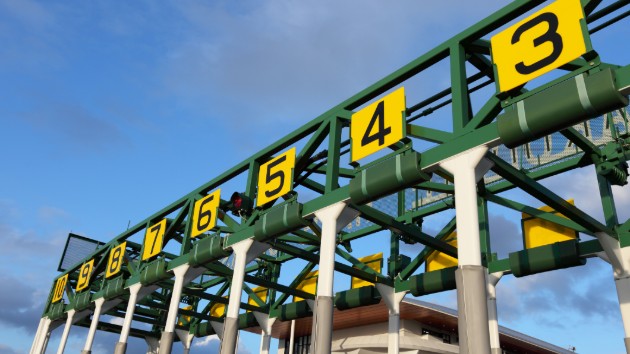 winhorse/iStock(ARCADIA, Calif.) — A Southern California horse racing track canceled races indefinitely on Tuesday after another horse died this week, marking the 21st fatality since the track opened for the winter season.
Santa Anita Park canceled races through the weekend with no timetable on when they would resume, just hours after a female equine suffered a fatal injury.
The 4-year-old filly sustained a leg injury during training on the main track and had to be euthanized.
"The safety, health and welfare of the horses and jockeys is our top priority," said Tim Ritvo, the chief operating officer for The Stronach Group, which operates the track. "While we are confident further testing will confirm the soundness of the track, the decision to close is the right thing to do at this time."
The Grade I Santa Anita Handicap; Grade II San Felipe, a precursor to the Kentucky Derby; and Grade II San Carlos have all been postponed and will be rescheduled, according to Ritvo.
Earlier, Santa Anita Park said it hired respected trackman Dennis Moore for consulting "as a precautionary measure with regard to the condition of the one mile main track."
"Moore, 69, who has more than 46 years of experience working with racing surfaces in California and worldwide, served as Santa Anita Track Superintendent from 2014 until his retirement this past Dec. 31," the park said in a statement Tuesday. "The son of a track superintendent, Moore grew up in racing and in addition to his father, Bob, his brother Ron has also served in the same role at various tracks in California."
At least 21 horses have died while racing or training since the track opened for the winter season on Dec. 26, according to California Horse Racing Board spokesperson Mike Martin.
Officials said many of the horses died after suffering various fractures, and at least one had a heart attack. Necropsies are being done to determine exact causes of death.
Santa Anita Park closed its main track in Arcadia, about 17 miles northeast of Los Angeles, for four days last week to evaluate the soil and determine if recent rainfall had contributed to the spike in deaths.
Park officials told ABC Los Angeles station KABC-TV on Sunday that racetrack conditions were good and that 390 horses completed workouts from Thursday to Saturday without incident, but that didn't stop animal rights protesters from showing up to the track and railing against the "ongoing danger to horses and riders from dangerous racing practices."
Experts said the unusually wet winter could have contributed to the deaths, but activists, including PETA, claimed the horses were being overworked.
"Twenty dead horses is 20 too many and the only responsible action is for the track to close immediately to stop this spiral of deaths," PETA said in a statement last weekend. "The California Horse Racing Board and Santa Anita must do this now, and law enforcement must begin an immediate investigation of trainers and veterinarians to find out if injured horses were being forced to run."
Trainers who have horses race at the park disputed allegations that the horses were being overworked.
"We love these animals. We don't send them out there thinking something bad is going to happen, and it's stressful," trainer Bob Baffert told KABC.
Copyright © 2019, ABC Radio. All rights reserved.

These four sisters are all expecting to give birth within months of each other
Man who shot seal in head with pistol as it rested on beach imprisoned for three months
‘The Talk’ reportedly goes on hiatus “indefinitely” following race flap
Border crisis will only get worse in coming months: Texas Rep. McCaul
Moderna announces vaccine trials on children as young as 6 months old
Texas power grid CEO fired in wake of last month’s fatal blackouts