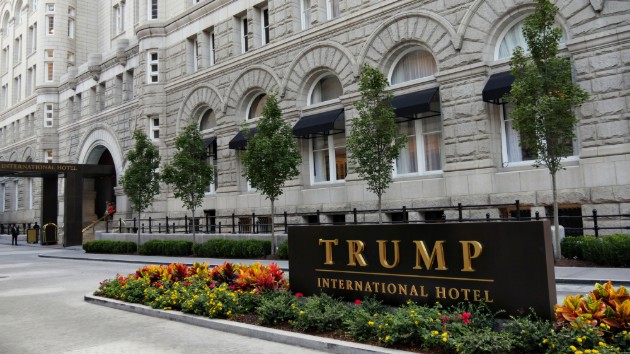 raksyBH/iStock(WASHINGTON) — T-Mobile has spent $195,000 at the Trump International Hotel in Washington since April of 2018, according to a letter the company sent to two Democratic lawmakers, a sharp increase matched by spending at other hotels in the nation's capital since the telecom giant announced a merger with Sprint requiring Trump administration approval.
"These hotel expenses cover a variety of types of business-related activities … including the cost of meeting space, catering, business center services, audio/visual equipment rental, lodging meals, taxes and other incidental expenses," T-Mobile Vice President Anthony Russo wrote in a Feb. 21 letter to Rep. Pramila Jayapal, D-Wash., and Sen. Elizabeth Warren, D-Mass.
Before April 29, 2018, the day news of the T-Mobile-Sprint merger was reported, just two top company officials had stayed at Trump’s hotel: Both CEO Tom Legere, and Executive Vice President David Carey stayed at the hotel overnight on Aug. 30, 2017.
The company said the total $195,000 spent at the president’s Washington D.C. hotel amounts to roughly 14 percent of T-Mobile's $1.4 million in hotel spending in that city over the same period of time. About half of that total figure was spent at Hilton hotels, T-Mobile said.

Following his election, Trump answered demands that he divest from his family businesses by placing his business empire in the control of his three adult children via a “blind trust” and pledging to donate any foreign earnings to the U.S. Treasury.
Neither the White House nor the Trump Organization responded to a request for comment.
The Washington Post first reported that nine of the company’s executives were scheduled to check in to the hotel the day after the merger was announced, and later reported that the company had reserved at least 52 nights at the hotel since the deal, which required administration approval since the deal was announced.
ABC News has not confirmed the Post’s reporting.
Democrats believe Trump has used the hotel to profit while in office, and claim he has violated a provision of the Constitution forbidding presidents to accept payment from foreign governments while in office.
“The American people deserve better than an administration that appears to be for sale to businesses eager to line the President’s pockets," Warren and Jayapal said in a statement Tuesday.
In their letter, T-Mobile denied that the spending at the president's Washington hotel was an effort to influence the administration's review of the company's merger with Sprint.
"T-Mobile respects the regulatory review process underway concerning our pending merger with Sprint," Russo, the company's vice president of federal legislative affairs, wrote in the letter to Warren and Jayapal. "The Department of Justice and Federal Communications Commission are giving this transaction a thorough and objective analysis. While we understand that staying at Trump properties might be viewed positively by some and negatively by others, we are confident that the relevant agencies address the questions before them on the merits."
A Justice Department spokesperson did not immediately return a request for comment.
Copyright © 2019, ABC Radio. All rights reserved.