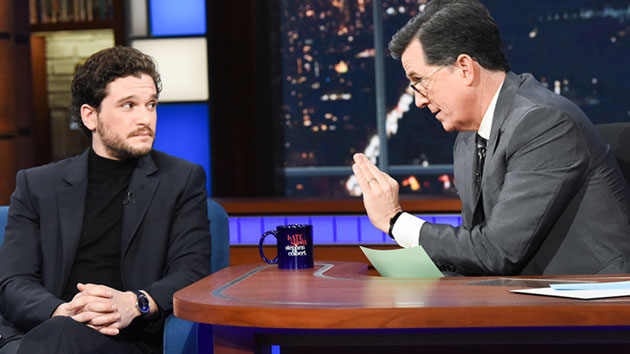 Scott Kowalchyk/CBS(NEW YORK) — With the first full-length trailer for the eighth and final season of Game of Thrones just released Tuesday, the timing was perfect for Game of Thrones star Kit Harington to drop by The Late Show with Stephen Colbert for a visit. Just don't ask him to spill the beans on how the story ends.

Harington, who plays Jon Snow on the HBO series, said not only can he not give any clues, his own guesses were off base.

"I had theories all along and all of them were wrong," Harington said. "And I'm quite glad I never told anyone my theories because they were all wrong."

Harington wouldn't even share what some of those wrong theories were, saying he was worried about starting speculation that would quickly get out of hand. That prompted Stephen Colbert to remark sarcastically, "You're a great guest right now!"

Though the first episode of Game of Thrones aired April 17, 2011, Harington's involvement at this point has lasted a decade, from the time he auditioned and was cast. He says he had no idea back then that he'd still be a part of it ten years on.

"It's extraordinary," he marveled. "It's sort of after ten years of it, I'm still pinching myself and I still can't quite grasp it."

Clearly there's lots Harington will miss about Game of Thrones, but Jon Snow's trademark fur cloak won't be one of them.

"It weighs a ton, it smells awful," he revealed. "I think they added weight to to it every year!"

Game of Thrones returns for its final season April 14 on HBO.