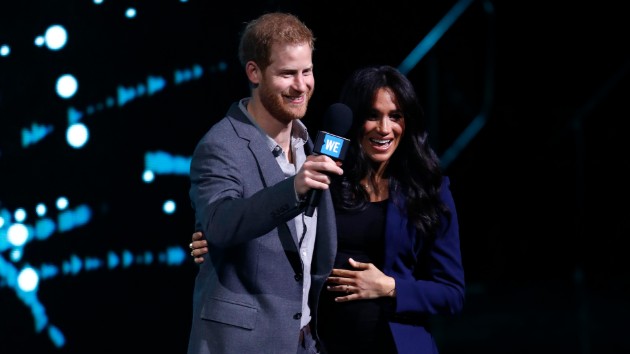 John Phillips/Getty Images(LONDON) — Meghan, the Duchess of Sussex, drew huge applause Wednesday when she joined her husband, Prince Harry, onstage in a surprise appearance.
Harry was making a speech at the We Day UK event at Wembley Stadium, which is organized by the WE Charity to address children's rights, when he reached down for the hand of Meghan and brought her onstage with him.
Meghan, pregnant with the couple's first child, was dressed casually in a blue blazer, black pants and black heels. She held Harry's hand and patted his back as the couple took in the applause from the crowd.
Harry shared a quote from Martin Luther King Jr. in his speech that he said is a favorite of Meghan's and one she often "reminds me with."
"Darkness cannot drive out darkness; only light can do that. Hate cannot drive out hate; only love can do that," Harry said, reciting the quote from King.
Harry's speech at the We Day event — delivered to a stadium full of young people — also touched on topics including mental health, social media and climate change.
"Dare to be the greatest generation of all time," Harry told the young people. "I am with you, we are with you."
Harry and Meghan's appearance at We Day came one day after they attended a reception at Buckingham Palace to celebrate Harry's father, Prince Charles.
When a well-wisher at the reception asked how she was doing, adding that he is sure everyone is asking her, Meghan, who has said she is due in April, gushed, "It's actually very sweet."
"What a very nurturing thing to ask," she added. "We're nearly there!"
Copyright © 2019, ABC Radio. All rights reserved.