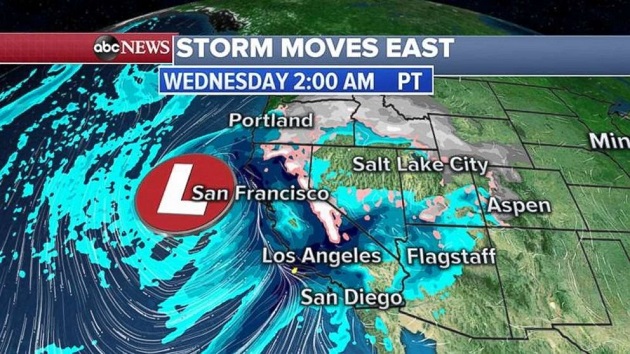 ABC News(NEW YORK) — Residents have been evacuated in the Thomas Fire burn scar area and roads are closed as another storm hit California on Wednesday. The night before, residents in Southern California were treated to a rare lightning display.
The Santa Barbara airport was hit by lightning, causing a brief power outage, according to ABC affiliate KEYT-TV.
The storm is expected to move inland and deliver heavy snow to the Rockies on Wednesday, as well.
Ahead of the storm, 10 states from California to Iowa are under snow, flood and high wind alerts.
The storm was sitting off the California coast early Wednesday and continuing to spread heavy rain and snow onto the West Coast.
Flash flooding and mudslides are the biggest threat Wednesday morning.
The storm will move inland during the afternoon and evening with several feet of snow expected through the Sierra Nevada Mountains and into the Rockies over the next 24 to 48 hours.
An additional 1 to 3 inches of rain in the lower elevations of California is expected in the next 24 hours, but they should be lighter during the evening across California.
The storm will take its time crossing the Rockies and Great Plains, but it will redevelop and strengthen in the central U.S. by Friday night into Saturday, and bring another round of severe storms for the already hard-hit Deep South. To the north, blizzard-like conditions are expected in the Northern Plains and western Great Lakes.

Arctic cold continues in East
Unseasonably cold air continues to linger in the eastern U.S. on Wednesday from the Great Lakes into the Gulf Coast and now into the Northeast.

Some areas of the Carolinas got more than 3 inches of unusual March fresh snow on Tuesday, while record-low temperatures were recorded in Texas, including 22 degrees in Waco.
Freeze warnings stretch from Texas to North Carolina on Wednesday morning and there is even a wind chill advisory for central Florida.
The Northeast will feel the coldest Wednesday, with temperatures running 20 degrees below normal. Wednesday night will be the coldest night with widespread temperatures in the single digits and teens.
Wind chills below zero will stretch from the Midwest into the Northeast on Thursday morning.
Copyright © 2019, ABC Radio. All rights reserved.