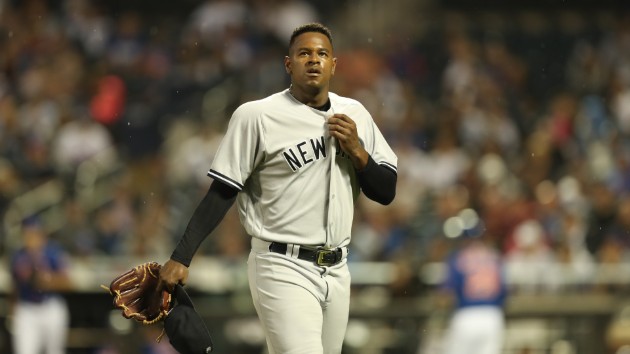 Allen Kee / ESPN Images(TAMPA, Fla.) — New York Yankees starting pitcher Luis Severino was scratched from Tuesday’s exhibition game against the Atlanta Braves after experiencing shoulder discomfort, and he will likely not be ready in time for Opening Day, according to Yankees manager Aaron Boone.
Speaking to YES Network, Boone said Severino felt discomfort in his right shoulder after throwing a warmup pitch. The All-Star pitcher was pulled from the lineup and replaced by left-handed pitcher Stephen Tarpley.
Tuesday would have been Severino’s first spring training start.
Severino later went in for an MRI, which revealed he has rotator cuff inflammation in his right shoulder. Boone said the 25-year-old will not be allowed to pitch for at least two weeks while he recovers.
With the Yankees’ Opening Day just over three weeks away, there’s a chance Severino may not be ready to take the mound when his team kicks off the regular season against the Baltimore Orioles on March 28 at home.
New York has not named a replacement for Severino should that be the case.
Copyright © 2019, ABC Radio. All rights reserved.