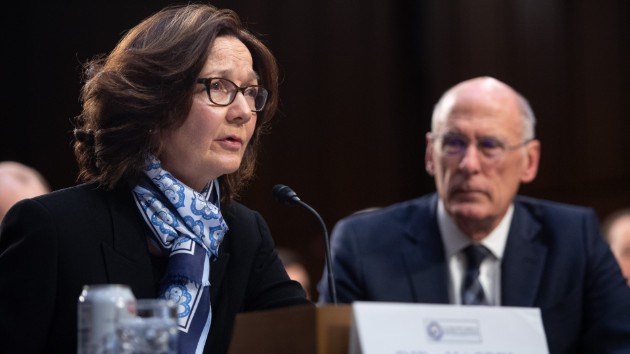 "Speculation, including that from former and unnamed intelligence officers, about what occurs in our Oval Office briefings is wrong," according to a joint statement from Director of National Intelligence Dan Coats and CIA Director Gina Haspel, which was provided to ABC News. "Simply put, these anonymous sources are not there as we deliver timely, unbiased intelligence and work alongside an engaged and knowledgeable President on the most complex national security issues."
Spokespeople for both the Office of the Director of National Intelligence and the CIA declined to comment about the reports to which Coats and Haspel were referring, what was incorrect in those reports or what prompted the statement.
In a statement to ABC News, White House press secretary Sarah Sanders said, "The President values his national security and intelligence teams and is proud of the accomplishments they have had in these first two years."
In the two-plus years of Trump’s presidency, several news reports have raised questions about his preferred intelligence briefing process: from its format and frequency, to his engagement, to the topics Trump purportedly prefers to discuss.

News organizations, including ABC News, have reported that the president prefers briefings that involve visuals, such as charts and graphs, to dense briefing books.

Trump told Axios in January 2017 that he prefers his briefings to have “bullets, or I like as little as possible.”

"I don’t need, you know, 200-page reports on something that can be handled on a page. That I can tell you," he said.

A month earlier Trump responded to reports that he was getting the President’s Daily Brief, a collection of the most pressing security issues of the day, only about once a week.

"I get it when I need it," Trump said in an interview with Fox News. "These are very good people that are giving me the briefings. … You know, I’m, like, a smart person. I don’t have to be told the same thing in the same words every single day for the next eight years. … I don’t need that. But I do say, 'If something should change, let us know.'"
More recently TIME reported that the president was disregarding the intelligence community’s assessments and displaying what one official reportedly called “willful ignorance.”

On Sunday, The New York Times reported that intelligence briefers had taken to framing their briefings in terms of economics and trade deals, catering to Trump’s greater interest in the subject.

Coats' and Haspel's defense of the president comes after Trump publicly lambasted the two in January following a Congressional hearing in which they made statements contrary to the president’s views on critical national security subjects, such as, Iran, North Korea and the Islamic State.

“Perhaps Intelligence should go back to school!” Trump tweeted in part. He later said it was a misunderstanding that he blamed on the media.