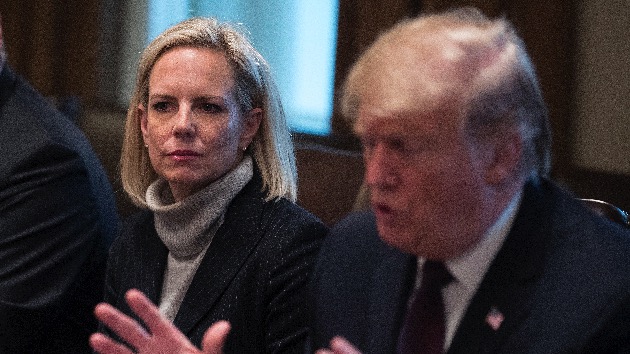 Chip Somodevilla/Getty Images(WASHINGTON) — Homeland Security Secretary Kirstjen Nielsen on Wednesday defended President Donald Trump's declaration of a national emergency at the southern border as she faced questioning for the first time since Democrats took control of the House.
"This is not a manufactured crisis," Nielsen told the House Homeland Security Committee. "This is truly an emergency."
She added, “The projections are dire. The agency is now on track to apprehend more migrants crossing illegally in the first six months of this fiscal year than the entirety of FY17 (fiscal year 2017), and at the current pace, we are on track to encounter close to one million illegal aliens at our southern border this year.
“No rational person would design an immigration system like we have today,” Nielsen continued. “It’s dangerous for Americans. It’s dangerous for migrants. It undermines our nation’s values. And it fails to uphold our fundamental obligations to the American people.”
In addition to defending the president's declaration, Nielsen was questioned about the administration policies that have led to family separations at the border and a new policy to make some asylum seekers wait in Mexico while their claims are considered.
Nielsen told the panel that “there was no parent who has been deported, to my knowledge, without multiple opportunities to take their children with them.”
That statement was at odds with what some migrants say has happened. Last week, 24 migrant parents said they were separated and deported without their children.
Democrats on the House Homeland Security Committee, led by chairman Rep. Bennie Thompson, continue to balance needs for border security with Trump’s demands for a border wall.
“Well, I don't think Democrats are opposed to any physical barriers, Thompson told ABC’s Martha Raddatz in January. “It's just the president constantly evolves his description of the wall just as he indicated Mexico was going to pay for whatever was there.”
The hearing has been in the works for months and the planning stages hit contentious points with Thompson telling reporters he would consider issuing a subpoena to compel Nielsen to testify. A Homeland security spokesperson said at the time that Nielsen has never refused to testify.
Wednesday’s hearing comes as families and children are crossing the southern border in record numbers, according to U.S. Customs and Border Protection, which released new arrest data Tuesday.
In February, border agents apprehended more than 36,000 families along the southern border, a record high in recent years.
That brings the total number of arrested families over the past five months to more than 130,000. It’s an increase of more than 300 percent compared to the same five-month period in 2018.
“It should be very clear from these numbers that we are facing alarming trends in the rising volumes of people illegally crossing our southwest border or arriving at our ports of entry without documents,” CBP Commissioner Kevin McAleenan said Tuesday.
McAleenan also acknowledged CBP’s enforcement measures are stronger than ever before.
“Our surveillance capabilities, our ability to interdict those who do cross, is at its highest level ever,” McAleenan said.
Total border arrests continue to trend upward from recent months with 66,000 reported in February, the highest monthly total since 2010.
Copyright © 2019, ABC Radio. All rights reserved.