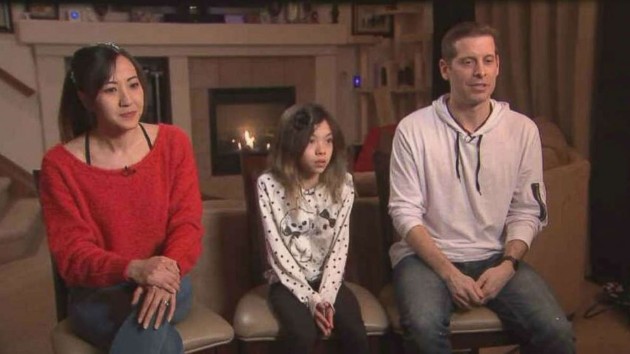 ABC News(NEW YORK) — The Goleman family was driving home from a Sunday ski trip in Colorado when they saw an avalanche barreling down the surrounding mountains toward them.
Shaune Goleman said he considered hitting the breaks on his truck or speeding ahead, but the highway was icy and there were cars both in front and behind his. So he told his wife and daughter to hang on.
"Right before the impact, I said, 'Guys, there's nothing I can do, just hold onto something,'" Shaune Goleman told ABC News in an interview that aired Wednesday on Good Morning America.
"I took my foot off the gas, just tried to focus on the road in front of me and tried myself to stay on the road until the impact hit," he said.
His wife, Tram Goleman, told ABC News their daughter, Kiera, who was sitting in the backseat, was the first to spot the fast-moving avalanche.
"The moment I saw it, I thought, 'Oh no,'" Tram Goleman said. "'Oh no, this is it.'"
Within seconds, the avalanche plowed onto Interstate 70 in the Ten Mile Canyon area near the town of Frisco, some 72 miles west of Denver. A thick curtain of snow swept across the windshield of the Goleman's truck, creating white-out conditions and causing the vehicle to shift sideways off the road.
"That's when I started thinking, 'This could have us buried here,'" Shaune Goleman told ABC News, recalling the "sheer force" of the snow slide and its "loud" rumbling.
The Colorado Avalanche Information Center reported the avalanche was likely a category 3, capable of destroying a home or a car. No one was seriously injured.
The Goleman family was unharmed and their truck was not damaged. The vehicle was engulfed in mounds of heavy snow but they were able to escape through the sunroof.
"I don't see how you could see it as anything other than miraculous that we survived the way we did," Shaune Goleman said.