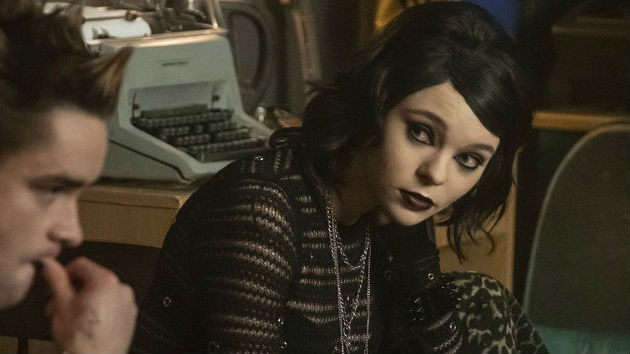 Photo by: Katie Yu/SYFY(NEW YORK) — With just three more episodes to go, Deadly Class is gearing up for a truly killer season finale.

Taylor Hickson, who stars as goth girl Petra in the Syfy comic book series about high school assassins, teases what fans can expect as the show’s first season winds down.

“Basically the next coming episodes all sort of lead up to the finale and it is killer,” she tells ABC Radio. “It's so good, it's so well-written, super action-packed.”

“That's my favorite thing that's been developing so far and I hope they take that into season two,” she says. “It's definitely a stronger connection than in the comics and I don't think they had any romantic interest at all in the graphic novel. …I'm excited to see how audiences take it.”

While on some level, Hickson can relate to Petra's high school struggles, she is decidedly less goth. The Canadian 21-year-old sports platinum blonde hair in real life, while Petra has a black spiky bob and dark makeup.

"I wasn't recognized at the premiere. People thought I was an audience member," she says. "They were like, 'How'd you enjoy it?' I was like, 'Well, I've seen it 57 times.'"

Deadly Class — which also stars Lana Condor, Benjamin Wadsworth and Benedict Wong — airs tonight on Syfy at 10 p.m. ET. You can also catch Hickson in the indie flick, Giant Little Ones, out now.