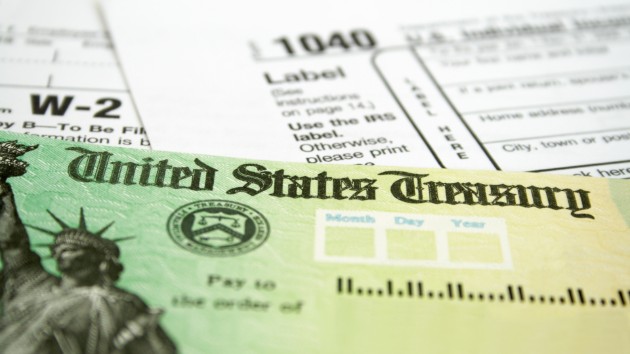 agshotime/iStock(WASHINGTON) — The average 2018 refund is up, according to the latest IRS accounting, after a sharp decrease at the start of tax season surprised taxpayers expecting to see more benefits from the Trump tax cut.
Four weeks into the tax filing season, the most recent IRS numbers, from Feb. 22, showed average tax refunds had increased by 1.3 percent over last year's, $3,143. A few weeks before, the statistics showed an 8 percent decrease in the average tax refunds compared to 2017.
The 35-day government shutdown earlier this year and sweeping changes to tax laws at first made it difficult for the IRS to explain the fluctuation.
Experts said that the tax cut meant people saw more in their paychecks over the course of the year because the Treasury Department and the IRS lowered the amount that could be withheld after the 2017 tax reforms.
A smaller withholding would predictably lead to a lower refund, which, in some cases, could put people in a position where they'll owe money, said Leigh Osofsky, a tax law professor at the University of North Carolina School of Law.
A statement now on the IRS website says the lack of data so early in the tax season also made it hard to pinpoint what caused the initial decrease in refunds.

"There are many factors that impact refunds on a weekly basis that will normalize over time and lead to useful conclusions," the statement reads.
While the average refund amount has increased from 2018, the data show that fewer people have filed their tax returns (4.8 percent compared to last year) and that the total amount given in refunds has decreased (3.6 percent less than in 2018).

Mark Mazur, director of the nonpartisan Tax Policy Center, a leading independent analyst group, points to changes in tax laws resulting from the Tax Cuts and Jobs Act that congressional Republicans passed and Trump signed at the end of 2017. The changes make it harder to predict people's behavior and how they will interact with a new system, he said.

"The new tax law has made it harder for people to get it together," he said. "As we have seen from people's reactions, especially on Twitter asking why their refunds have changed."

Visits to the IRS website have increased by 9.1 percent since last year as people continue to try and navigate the new tax system.

Approximately 80 percent of all Americans who file taxes expect to receive a refund from the government in 2019.
Copyright © 2019, ABC Radio. All rights reserved.