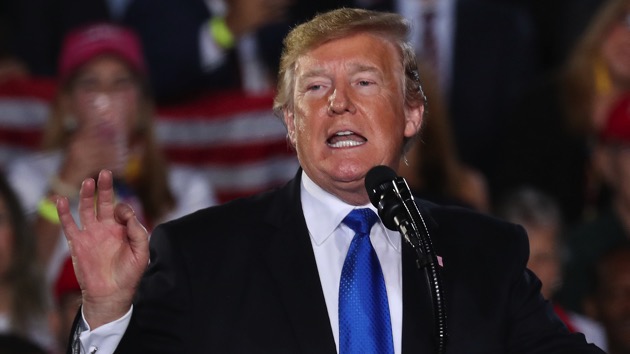 Joe Raedle/Getty Images(WASHINGTON) — Eighty-one individuals and entities contacted Monday morning by the House Judiciary Committee have now had the first glimpse of the demands they will face as Congress ushers in the next phase investigations into President Donald Trump.
Members of the Trump family, key figures in the 2016 campaign, as well as past and present White House aides have all have been contacted by House Judiciary Chairman Jerold Nadler, a New York Democrat. The chairman’s letters asked for documents that ranged from modest to broad, sweeping requests, depending on the recipient. Some, such as the letter to the president’s son-in-law, Jared Kushner, spanned four full pages. And these requests come from just one House committee – others have also launched probes and are actively seeking information from many of the same recipients.

Most of the inquiries focused on specific subject areas, among them:

Contact between Trump campaign associates and Russians
The committee is asking multiple individuals for “any contacts, direct or indirect, from January 1, 2015 to January 20, 2017 between or involving the Russian Federation and its officials, agents, intermediaries, and/or instrumentalities and any of the following: Donald Trump, the Trump campaign, the Trump Organization, [former campaign chairman] Paul Manafort, [deputy campaign chairman] Rick Gates, [Trump’s former personal attorney] Michael Cohen, [former national security adviser] Michael Flynn, [former Attorney General] Jeff Sessions, [Jared] Kushner…” and a host of others.

Presidential pardons
A number of recipients were asked about conversations President Donald Trump and his associates have had over the course of special counsel Robert Mueller’s probe relating to possible pardons for Manafort (who was convicted of a range of financial crimes), Flynn (convicted for lying to federal investigators), or Cohen (recently sentenced to prison for financial crimes and lying to Congress).

Trump-Putin meetings
Investigators asked past and current administration officials, and even members of the Trump family, about the contents of meetings between Trump and Russian President Vladimir Putin on July 7, 2017 in Hamburg, Germany during the G-20 summit; Nov. 11, 2017 in Paris during the centennial celebration of the armistice ending WWI; July 16, 2018 in Helsinki, Finland during the Russia-U.S. summit; and Nov. 30, 2018 in Buenos Ares, Argentina during that year’s G-20 summit.

The Trump Tower meeting on June 9, 2016
The panel has also sought records about the now-infamous June 9, 2016 Trump Tower meeting and both the Russian and American participants who met under the pretense that they would discuss possible dirt, gathered by the Russians, about Trump’s campaign opponent, Democrat Hillary Clinton. The meeting has come under scrutiny by the special counsel and the other congressional bodies who’ve previously launched investigations.

The Trump Tower-Moscow development project
The committee is seeking details about “Trump Tower Moscow (also known as the “Moscow Project”) or any other proposed or possible real estate development in the Russian Federation by Donald Trump or the Trump Organization from Jan. 1, 2015 to the present.” In part, the request appears aimed at locking down a timeline for the most recent proposal. That timeline has evolved over the course of the investigation, with Trump associates saying the project was not entertained during the presidential election to Trump eventually telling the special counsel, according to his lawyer, those conversations may have extended much deeper into the 2016 campaign.
Any AMI hush-payment’s coordinated by Michael Cohen Investigators asked plenty of questions about the payments made by Cohen, to bottle up allegations of Trump’s extramarital affairs. The committee wrote to many individuals including the Trump Organization seeking “all documents relating to any payment, or discussions regarding any actual or potential payment, to any person or entity by Michael Cohen, Essential Consultants LLC, or American Media Inc. (“AMI”) for the benefit of Donald Trump or the Trump Campaign. This includes, but is not limited to, any documents relating to the reimbursement of Cohen, Essential Consultants LLC, or AMI for any such payments, and any documents relating to the omission or inclusion of information about liabilities associated with such payments on Donald Trump’s Public Financial Disclosure Reports (OGE Form 278e) filed in 2017 and 2018.”

Attorneys general from Maryland and the District of Columbia have filed a lawsuit against the Trump administration alleging violations of a constitutional prohibition against private foreign payments to the president, known as emoluments. Now the Judiciary committee is seeking information about possible violations, asking for documents relating to “any foreign government discussing, offering, or providing, or being solicited to discuss, offer, or provide, any present or emolument of any kind whatever on or after November 8, 2016 to (a) Donald Trump or his Business Interests; (b) Trump Organization; (c) Jared Kushner or his Business Interests; (d) Ivanka Trump or her Business Interests; or (e) the 58th Presidential Inaugural Committee.”

The committee is looking for any indication that those around Trump may have offered to provide Russia with relief from crippling economic sanctions, theorizing that such an offer may have been made as a repayment for the country’s campaign support. The document requests included records related to any “discussions of United States imposed sanctions or potential sanctions against the Russian Federation from June 16, 2015 to January 20, 2017 involving members of Trump’s campaign and national security teams.

The committee is looking for evidence of “any contacts, direct or indirect, from January 1, 2016 to the present between or involving WikiLeaks and its officials, agents, intermediaries, and/or instrumentalities” – a reference to the organization that, during the campaign, posted volumes of hacked Democratic email online.
Copyright © 2019, ABC Radio. All rights reserved.