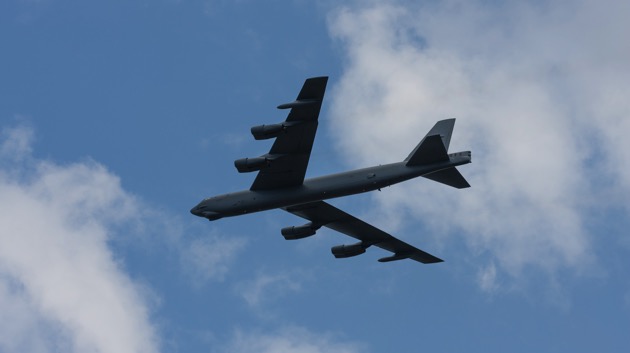 The Twitter account Aircraft Spots tracked the flight from Guam to the South China Sea west of the Philippines.

The B-52 aircraft involved in the mission are part of the U.S. Air Force’s Continuous Bomber Presence (CBP) based in Guam. Since 2004, the U.S. has rotated B-1, B-52 and B-2 long-range bombers out Andersen AFB in Guam to conduct training missions in Asia.
Much like the U.S. Navy's freedom of navigation operations when it sails past two disputed island chains claimed by China in the South China Sea, the Air Force missions are intended to assert that the area is international airspace as well, much to China's chagrin.
In the South China Sea, China claims as its own territory the Paracel Islands as well as seven artificial islands in the Spratly Islands chain. It has militarized both chains and claims sovereignty over the waters and airspace surrounding the islands.
U.S. Pacific Air Forces last confirmed a B-52 mission in the South China Sea on Nov. 20 of last year.
That mission was one of a series of B-52 flights in the region that had taken place in the vicinity of the South China Sea last fall.
Copyright © 2019, ABC Radio. All rights reserved.