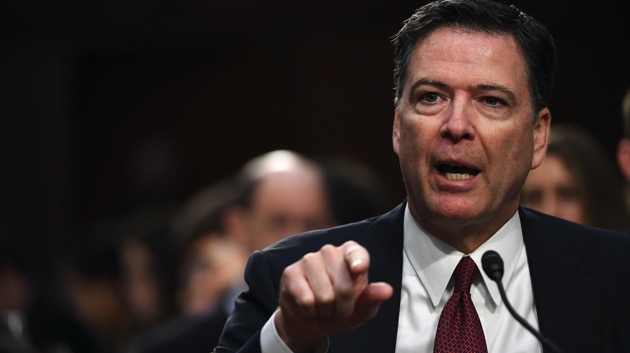 Matt McClain/The Washington Post via Getty Images(WASHINGTON) — Former FBI Director James Comey argued in a new op-ed in the Washington Post on Tuesday that Attorney General William Barr can be more transparent about special counsel Robert Mueller's findings than some now claim.
"[P]ast departmental practices suggest he can release far more details than many people may now realize," Comey writes.
In particular, Comey singled out Republicans who "claim Justice Department rules forbid transparency about the completed work of the special counsel." And he said Democrats have been wrong about how those same guidelines should apply to his decision to publicly criticize Hillary Clinton for her use of a private email server as secretary of state, even though he determined charges against her weren't warranted.
The "public interest" of the Clinton-related probe "required that we speak," Comey said.
But, he insisted in the Washington Post, it is "difficult to imagine a case of greater public interest than" Mueller's probe, which he described as "focused on the efforts of a foreign adversary to damage our democracy, and in which the president of the United States is a subject."
"I don’t know all the considerations that will go into deciding precisely what to say about the completion of the special counsel’s work and when to say it," Comey wrote. "It’s always important to consider guidelines and routines. But don’t listen to those who tell you transparency is impossible. Every American should want a Justice Department guided first and always by the public interest. Sometimes transparency is not a hard call."
Comey's op-ed comes as Attorney General William Barr decided he will not recuse himself from oversight of the Mueller investigation.
“Following General Barr’s confirmation, senior career ethics officials advised that General Barr should not recuse himself from the Special Counsel’s investigation. Consistent with that advice, General Barr has decided not to recuse,” a Justice Department spokeswoman said in a statement Monday.
Nevertheless, when it comes to oversight of Mueller's probe, Deputy Attorney General Rod Rosenstein is still acting as the liaison between Mueller’s office and the Justice Department, according to a department official.
In his op-ed, Comey cited various other cases that he claimed showed the Justice Department can speak out under certain circumstances. Comey specifically mentioned the Justice Department's reports detailing findings in the investigations looking at the killing of unarmed teenager Michael Brown in Ferguson, Missouri, allegations of improper political bias in IRS probes, and the terrorism-related scrutiny of American citizen Jose Padilla after the Sept. 11, 2001 attacks.
Padilla, as Comey noted, was "an American citizen captured in the United States and held by presidential order as an enemy combatant in a Navy brig."
In the Padilla case, the Justice Department argued at the time he was an enemy combatant and not subject to due process in civilian courts. The limiting factor on sharing information in his case had little to do with protecting the rights of the uncharged, but rather protecting intelligence sources and methods.
As the Bush administration faced a Supreme Court challenge, Padilla was eventually charged and convicted in federal court.
Meanwhile, Comey himself exercised limited transparency in other high-profile cases.
As deputy attorney general in 2003, Comey appointed U.S. Attorney Pat Fitzgerald as special counsel to investigate the leak of the identity of CIA agent Valerie Plame.
But Fitzgerald's appointment was not made under the same regulations that Mueller was appointed, and Fitzgerald was not required to send a final report to the attorney general. Subsequently, there was no report produced for Congress.
Just three weeks on the job and standing next to then-Assistant Attorney General Chris Wray announcing the appointment, Comey said, “I can't tell you about the details of any criminal investigation because our goal is to make sure that anyone we're pursuing doesn't know what we're doing and also anyone who might not be charged with a crime is not unfairly smeared.”

Trailblazing beauty inventions and innovations made possible by people of color
More Americans say they plan to get COVID-19 vaccine as soon as possible: Poll
Spring-like weather across much of US, possible heavy snow in Rockies and parts of West
Matt James breaks silence on ‘Bachelor’ controversy: “It has been devastating and heartbreaking”
Congress aims to avoid politics with independent Jan. 6 investigation
Mental health seen as possible new risk factor for heart disease: Why women are more affected