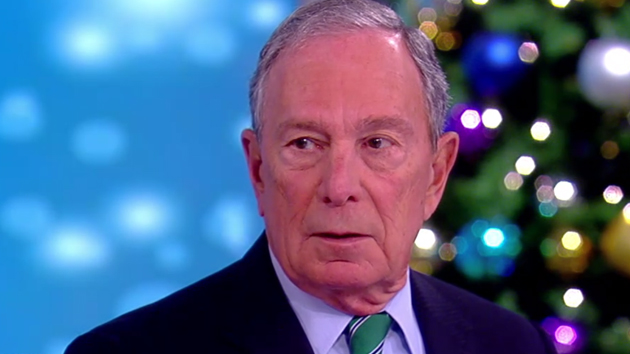 ABCNews.com(NEW YORK) — Acknowledging the difficulty of competing in an increasingly crowded and competitive Democratic primary, former New York City Mayor Michael Bloomberg will not be running for president in 2020, he said in a post on Tuesday.
"I know what it takes to run a winning campaign, and every day when I read the news, I grow more frustrated by the incompetence in the Oval Office," Bloomberg wrote in an opinion piece published on the Bloomberg publication website.
Bloomberg, who became a registered Democrat last year, stressed in his post that his decision not to run is not because he believes he cannot defeat President Donald Trump. Instead, he wrote that he is "clear-eyed" about his chances of winning in a packed Democratic primary as a moderate pragmatist.
"I believe I would defeat Donald Trump in a general election. But I am clear-eyed about the difficulty of winning the Democratic nomination in such a crowded field," he wrote.
Had he run, the business acumen that has enabled him to become one of the world's richest people, would also have allowed him to occupy a unique position in a Democratic field that — thus far — is mostly made up of candidates who have spent the majority of their careers in public office.
Ultimately he wrote that he concluded that the more effective route for accomplishing his policy goals rested outside the realm of a presidential campaign.
"I know there’s much more we can accomplish over the next two years, but only if we stay focused on the work and expand upon it," Bloomberg wrote. "And the fact is: A national presidential campaign would limit my ability to do that."
The news that Bloomberg was expected to keep intact his powerful political operation is likely welcome news for Democrats, who face the difficult task of unseating an incumbent president. That has not been accomplished since 1992, when then Gov. Bill Clinton defeated former President George H.W. Bush.
The former mayor's exit comes as the country awaits an announcement from former Vice President Joe Biden, who said last week that he is in the "final stages," of a presidential decision and that there is a "consensus" among his family that he should make a run for the White House.
Bloomberg also said that he said he would rather spend the two years leading up to the next inauguration working on projects for actionable change.
The projects he plans to work on include a renewed commitment to the "Beyond Coal" campaign, "so that we can retire every single coal-fired power plant over the next 11 years," he wrote. He also intends to focus some efforts on gun violence, education, the opioid crisis and health care.
While Bloomberg lamented the slim chances of major gun control legislation passing Congress, he touted the progress made on the issue at the state level, efforts that are likely to continue throughout the 2020 campaign.
"Thanks to strong grassroots efforts that we have spent years organizing and mobilizing, 20 states have passed stronger background check bills or adopted other laws that help keep guns out of the hands of dangerous people. But 20 states is not enough, and we can’t stop now given the risks to our country," Bloomberg wrote.
First elected mayor of New York City as a Republican in 2001, Bloomberg spent over $100 million to help elect Democrats during the 2018 midterm elections and said Tuesday that he will continue to support candidates who could "provide the leadership we need — on climate change, gun violence, education, health, voting rights, and other critical issues — and continue holding their feet to the fire to deliver what they promise."
The decision also comes as a number of other high-profile Democrats have announced they will not be running for president in 2020.
Hillary Clinton, the party's 2016 nominee, former U.S. Attorney General Eric Holder and Oregon Sen. Jeff Merkley have all announced this week that they are not mounting White House bids.