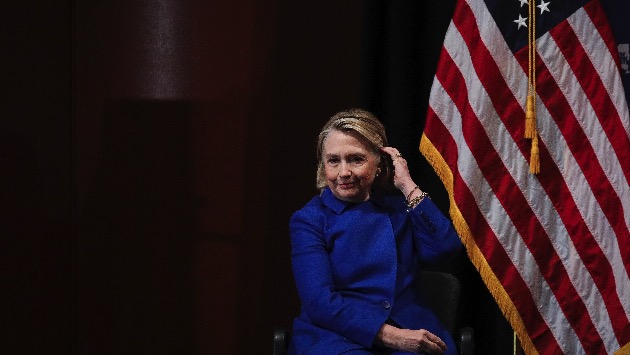 Drew Angerer/Getty Images(NEW YORK) — While few expected her to mount a third bid for the White House, former Secretary of State and 2016 Democratic nominee Hillary Clinton explicitly ruled out a 2020 presidential bid, but pledges to play an active role in the upcoming campaign.
"I'm not running, but I'm going to keep on working and speaking and standing up for what I believe," Clinton told local New York television station News 12 in an interview on Monday.
"I'm not going anywhere. What's at stake in our country, the kind of things that are happening right now are deeply troubling to me," Clinton added, saying that she will do "everything I can," to help Democrats win back the White House in 2020.
Clinton, who in 2016 became the first female presidential nominee of a major American political party, also said she has had conversations with a number of the Democratic candidates who already have announced candidacies.
"I've told every one of them, don't take anything for granted, even though we have a long list of real problems and broken promises from this administration that need to be highlighted," Clinton said.
Following her loss to Donald Trump in 2016, Clinton campaigned for a number of Democrats during the 2018 midterms, and this past weekend joined 2020 presidential candidates Sen. Cory Booker of New Jersey, Sen. Sherrod Brown of Ohio and her competitor in the 2016 Democratic primaries Sen. Bernie Sanders of Vermont, in Selma, Alabama, for a commemoration of "Bloody Sunday," the 1965 civil rights march in which demonstrators were beaten and tear-gassed by police as they attempted to cross the Edmund Pettus Bridge.
"This is a time, my friends, when fundamental rights, civic virtue, freedom of the press, the rule of law, truth, facts and reason are under assault," Clinton said in her remarks over the weekend. "And make no mistake, we are living through a full-fledged crisis in our democracy."
But even as Clinton rules out another campaign, her presence has been felt in the early stages of the 2020 race, and the animosity between her campaign and Sanders seems to have endured well past 2016.
While she and Sanders have largely put the lingering bitterness of the 2016 campaign behind, the Vermont senator said earlier this month on ABC's The View that he is unlikely to take advice from his formal rival as he makes a second attempt to capture the Democratic nomination.
"Hillary and I have fundamental differences, and that's what it is," Sanders, who launched his 2020 presidential bid last month, said.
Former Clinton adviser Nick Merrill responded to Sanders comment, calling it "irresponsible" and "counter-productive."
Clinton's decision to not forgo a 2020 bid comes as the field of Democratic contenders has swelled to over a dozen candidates, including six U.S. senators, two current or former governors, two current or former U.S. Representatives, and a former U.S. Cabinet secretary.
The decision also comes as a number of high-profile Democrats are announcing that they will not seek the presidency in 2020.
Former U.S. Attorney General Eric Holder and Oregon Sen. Jeff Merkley have both announced this week that they are not running for president in 2020. Merkley is instead seeking re-election to the Senate, and Holder said he is re-doubling his focus on the issue of redistricting.
Copyright © 2019, ABC Radio. All rights reserved.