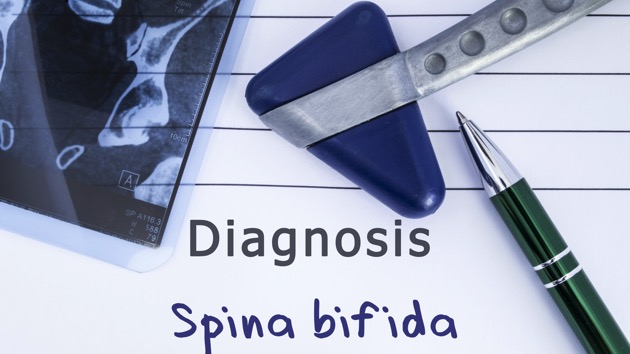 Shidlovski/iStock(DURHAM, N.C.) — A 4-year-old girl with spina bifida is walking directly into our hearts thanks to an adorable video of her taking her first steps with her classmates cheering by her side.
The sweet moment of Kenydii Parker walking was captured on video by her aunt, who posted it to Facebook where it has over 4 million views and has been shared by almost 100,000 people.
"We were surprised by the views, but we weren't surprised by the love," Kenydii's, father Kenneth Parker, of Durham, North Carolina, said. "We always knew she was a special child."
Kenydii's parents, Kenneth and Terry Parker, told ABC News that when they learned their seventh child would have spina bifida, they were completely blindsided. Spina bifida is a condition in which the baby's spinal cord fails to develop properly, according to the CDC, which can cause physical and intellectual complications depending on the severity of the child's case.
"It felt like our world crashed down because the way [doctors] described it made it seem like the end of the world," Kenneth Parker said. "We prayed about it and stood strong. We knew that whatever this child would go through, we would go through it with her."
Since then, Kenydii has had five major surgeries, two on her head and three on her legs, her dad said. Kenneth Parker said some of his hardest moments as a parent were when Kenydii told him that she wants to walk like the other kids.
"Sometimes I have to leave the room and get myself together when she says things like that," Parker said. "I never want her to think she's a pity child."
Despite all Kenydii has been through, Parker said she is always smiling.
"Anybody that encounters Kenydii falls in love with her at first sight. She is always smiling, talking and laughing," Parker said. "To some she may not seem like a perfect child, but she is perfect to us."
The Parkers enrolled Kenydii in a developmental needs pre-K class in November at W.G. Pearson Elementary School in Durham. Her two teachers, Katie McGonnell and Kim Tisdale, said Kenydii is "a blessing" to the class.
"Kenydii is such a cheerful little girl — always so happy," Tisdale told "GMA." "Her personality is so big. Much bigger than her wheelchair."
Along with Kenydii's big personality comes determination. After using a wheelchair for months after a major surgery, Kenydii was on a mission to take her first steps on her own at school.
"She began walking in the hallway so we brought her outside so her classmates could cheer her on," McGonnell said. "It was a really big day and so amazing to watch. It was her first day walking and you would've thought she'd been doing it her whole life."
Kenydii's father said his daughter will continue to thrive not only because of her personality, but because of her amazing support system both at school and at home.
"Anybody who encounters Kenydii wants to help her because she has a good heart," Parker said.
"The day after she walked in front of her class she was asking to do the stairs," McGonnell said. "She has so much grit. She's such a special little girl."
Go Kenydii, go!

Ghislaine Maxwell, associate of Jeffrey Epstein, requests release on bail for third time
14-year-old girl abducted in North Carolina is found safe in Arkansas: Police
Patrick Mahomes and fiancee Brittany Matthews welcome baby girl
‘Normal People’ star Daisy Edgar-Jones is “so excited” for ‘Conversations with Friends’
Hulu’s ‘Conversations with Friends’ finds its cast
US says it will ‘respond’ to Iraq missile attack that injured Americans at ‘time and place of our choosing’