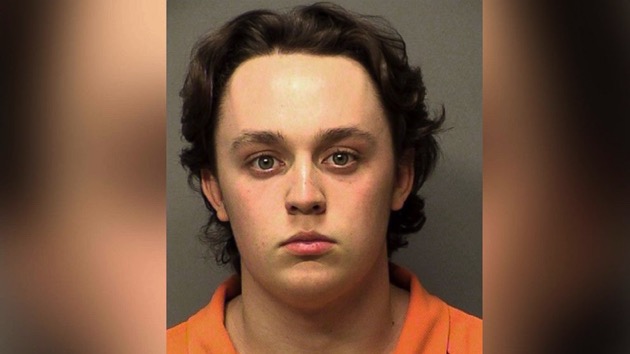 (Porter County Sheriff's Office) Connor Kerner is a suspect in the murder of two teens in Indiana.
Posted on March 5, 2019 by ABC News

(Porter County Sheriff's Office) Connor Kerner is a suspect in the murder of two teens in Indiana. (PORTER COUNTY, Ind.) — A 17-year-old allegedly killed two Indiana teenagers in his grandparents' garage and then set their bodies on fire inside their car, officials said.
Connor Kerner was arrested on Saturday for the murders of 19-year-old Molley Lanham and 18-year-old Thomas Grill, the Porter County Sheriff's Office said on Monday in a statement.
Kerner, of Valparaiso, Indiana, was charged with two counts of murder, the sheriff's office said. Kerner is being tried as an adult, Porter County Prosecutor Gary German told ABC News on Tuesday.
Grill, of Cedar Lake, Indiana, and Lanham, of St. John, Indiana, were last seen on Feb. 25, according to the sheriff's office.
On Saturday morning sheriff’s detectives started investigating information from "an anonymous source," who said the missing teenagers were killed by Kerner, the sheriff's office said.
The anonymous source allegedly said he or she was at Kerner's home on Feb. 25 when Kerner said, "I killed someone and I killed an innocent girl," according to court documents.
The source told authorities that Kerner said the murders happened in his grandparents' garage while they were out of town, according to court documents.
The source said Kerner said Grill came over with his girlfriend, Lanham, for a drug deal, and when Grill tried to rob him, he shot him, according to court documents.
"Grill fell to the ground and was begging for his life," the source said, according to documents. "Kerner advised that he panicked due to being out of bullets in the gun. Kerner then beat him with a pipe wrench until he died."
Lanham was out at the car at the time, and the source said Kerner had Lanham come into the garage and showed her Grill's body, according to court documents.
Kerner "informed her that he was going to let her go, but if she told, he would kill her," the source said, according to court documents. "Kerner advised that when she turned to leave the garage, Kerner shot her in the head, killing her."
The source said Kerner admitted to putting the bodies in the trunk of the car, driving about two miles away where he lit the car and bodies on fire, according to documents.
The two victims found inside the car have not been identified, but "all evidence obtained at this point" lead investigators to believe the bodies are Grill and Lanham, according to the sheriff's office.
"DNA is being sent to the lab for processing and the Porter County Coroner’s Office will be working on a forensic autopsy with medical records to confirm the identities," the sheriff's officials said.
When Kerner was arrested, he refused to answer questions, the sheriff's office said. Kerner is being held without bond at the Porter County Jail and is due to appear at a status hearing in May, according to the prosecutor's office.
Kerner's attorney did not immediately respond to ABC News' request for comment.
Copyright © 2019, ABC Radio. All rights reserved.