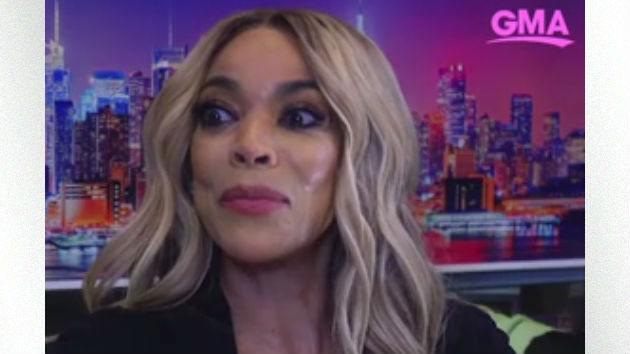 ABC(NEW YORK) — Wendy Williams made her official return back to television on Monday, and not surprisingly, had plenty to say about her hiatus.

After a standing ovation from the audience, Williams said she was "doing better now," and went on to explain why she needed to extend her two week Christmas vacation after she "started to feel thyroid issues."

"I’m the kind of patient, if I cough, I’m thinking, I’m dying … I can’t even tell you how many doctors I have," she joked. "And I’m happy to tell you that I am doing swell."

During her speech she also apologized to her Wendy viewers. "I’m sorry it took me 40, almost 50 days," she said. "I’m sorry … but I have to say it’s not going to happen anymore."

It was during her Hot Topics segment that Williams finally seemed to address the rumors that her marriage to her husband Kevin Hunter was on the rocks because of his ongoing infidelity and abuse.

"I want to shout-out to my husband. I’m still wearing my ring," she said. "Believe me you, when you’ve been with somebody for twenty-eight years, married for twenty-five years… We know each other. He’s my best friend, he’s my lover. He's all this and he's all that. I know what you’ve been seeing, and I know what the streets been talking about."

She continued, "Marriages have ebbs and flows, marriage isn’t easy. And don’t ask me about mine until you see this gone," she added, gesturing to her wedding ring. "And it ain’t going anywhere, not in this lifetime."

As previously reported, Williams revealed in January that that she decided to delay her return to her show due to a fractured shoulder and, "complications regarding her Graves’ Disease that will require treatment."

Since then, the show has been airing repeats, as well as original episodes with a variety of guest hosts.