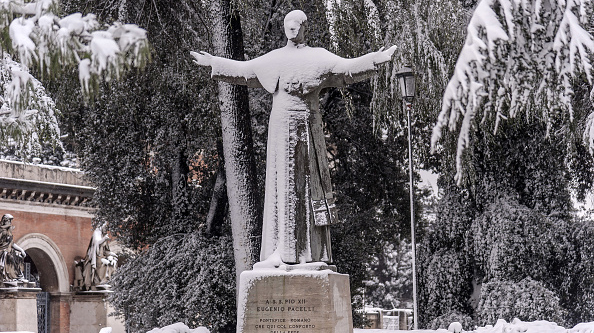 Stefano Montesi – Corbis/Corbis via Getty Images(VATICAN CITY) — Pope Francis’ decision to open the secret archives of one of his predecessors means scholars will soon have new insights into a question that has vexed the Roman Catholic Church since World War II: What role did the Vatican play in the Holocaust?
The Vatican maintained a policy of neutrality during World War II, and never denounced fascism. Jewish groups have long accused the church or turning a blind eye to atrocities committed against Jews by Hitler’s Germany and Mussolini’s Italy.
The Vatican insists Pius XII, who served as pope from 1939 until his death in 1958, worked quietly behind the scenes to protect Jews and did not speak out because of concern that doing so might make matters worse.
“The Church is not afraid of history,” Pope Francis said this week, in announcing his decision to make the entire secret archives of Pius’s papacy available to researchers beginning March 2, 2020.
Pope Francis said he made the decision “with a serene and confident soul, certain that serious and objective historical research will be able to evaluate it in its proper light.”
The American Jewish Committee welcomed the move.
“For more than 30 years, the AJC has called for the full opening the Holy See’s Secret Archives from the period of World War II,” said Rabbi David Rosen, the group’s International Director of Interreligious Affairs, in an official statement.
A spokesperson for Yad Vashem, the World Holocaust Remembrance Center, issued a statement as well. “For years, Yad Vashem has called for the opening of these archives, which will enable objective and open research as well as comprehensive discourse on issues related to the conduct of the Vatican in particular, and the Catholic church in general, during the Holocaust,” the statement reads. “Yad Vashem expects that researchers will be granted full access to all documents stored in the archives.”
The Vatican typically waits 70 years after the end of a pontificate before opening the archives to researchers, but critics pressured the church to open the Pius XII archives sooner while many Holocaust survivors are still alive.
During the 1960’s, Pope Paul VI ordered Vatican researchers to look in the secret archives for evidence to rebut a growing public perception that Pius XII failed to stand up to Hitler. That material, collated between 1965 and 1981, has already been published on the Vatican website.
In 2008 at a mass marking the 50th year since Pius’ death, Pope Benedict XVI defended his predecessor, saying he worked “secretly and silently to avoid the worst and save the greatest number of Jews possible.”
But the lingering questions over the church’s response to Nazism have become a stumbling block in the cause for sainthood for Pope Pius XII. The Church officially declared Pius “venerable” in 2009, but three of his successors — Popes John XXIII, Paul VI, and John Paul II — have all been declared saints before him.