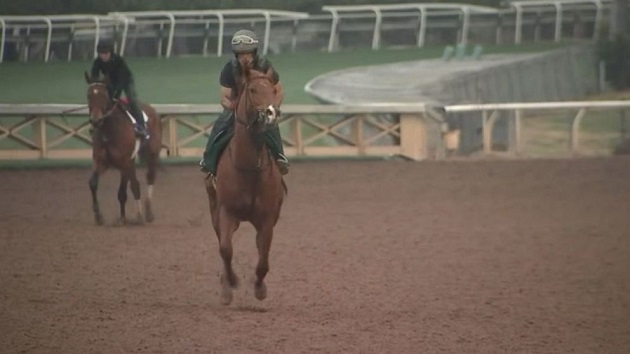 KABC-TV(ARCADIA, Calif.) — Another horse has died at Santa Anita Park, the prominent Southern California racetrack, becoming the 20th reported dead there in about two months.
The horse suffered an ankle injury while leading the pack at a race on Saturday, just two days after the track reopened after closing for a soil inspection.
The 4-year-old filly, named Eskenforadrink, had to be euthanized.
"We love these animals. We don't send them out there thinking something bad is going to happen, and it's stressful," trainer Bob Baffert told ABC Los Angeles station KABC-TV.
Park officials told KABC on Sunday racetrack conditions were good and that 390 horses completed workouts from Thursday to Saturday without incident, but that didn't stop animals rights protesters from showing up to the track and railing against the "ongoing danger to horses and riders from dangerous racing practices."
Santa Anita Park closed its main track in Arcadia, about 17 miles northeast of Los Angeles, for four days last week to evaluate the soil and determine if recent rainfall had contributed to the spike in deaths. Eskenforadrink is the 20th horse to die since the track's winter season began on Dec. 26.
"This is unusual. It does happen though — it's called statistical clustering — but we always take it seriously," Mick Peterson, director of the University of Kentucky's Agricultural Equine Programs, told KABC. "This is not an acceptable number of catastrophic injuries."
Experts said the unusually wet winter could have contributed to the deaths, but animal rights activists, including PETA, have alleged the horses are overworked.

"Twenty dead horses is 20 too many, and the only responsible action is for the track to close immediately to stop this spiral of deaths," PETA said in a statement.
Peterson and Santa Anita Park track Superintendent Andy LaRocco tested soil samples and deemed the main track "100 percent ready" for racing and training last week.
"The ground-penetrating radar verified all of the materials, silt, clay and sand, as well as moisture content, are consistent everywhere on this track," Peterson said in a statement Wednesday. "This testing ensures all components, the 5-inch cushion, pad and base, are consistent and in good order."
Officials said the horses died after suffering various fractures, and at least one had a heart attack, KABC reported. Necropsies are being done to determine exact causes of death.
Copyright © 2019, ABC Radio. All rights reserved.