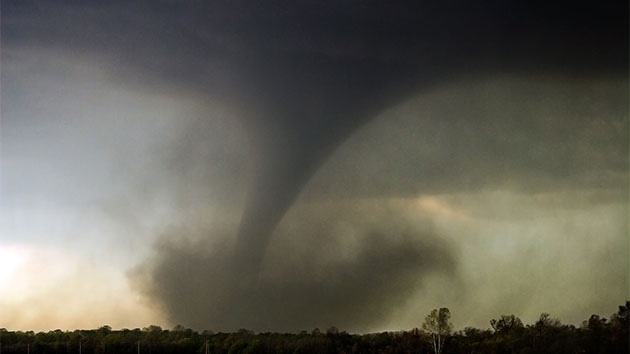 clintspencer/iStock(BEAUREGARD, Ala.) — At least 23 people were killed in southeastern Alabama on Sunday after a slew of damaging tornadoes ripped through the area, officials said.
The death toll in Lee County likely will rise as search and rescue crews go back out Monday morning. So far, all of those killed are from the town of Beauregard, Lee County Sheriff Jay Jones told ABC News, who described the damage as "catastrophic."
"Homes completely destroyed, nothing left but the slabs — concrete slabs that they existed on," Jones said in an interview Monday on Good Morning America.
Drones equipped with heat-seeking devices were deployed to look for survivors overnight, but the teams on the ground were forced to wait for morning light. Officials have not yet released details about any of the victims.
"We're going to concentrate on the areas that had the most damage," Jones said. "We still have some individuals that are unaccounted for, and that's where we're going to begin our search this morning."
Search and rescue teams will be using helicopters to survey the extent of debris, which Jones said is scattered over at least a one-square-mile area.
"Last night, we just didn't have enough light," he added. "Today, we'll get a much better picture of how big this area is."
At least a dozen tornadoes touched down in Alabama, near the Georgia state line, on Sunday, according to data from the National Weather Service. The first one to hit Lee County was at least a half-mile wide with dangerous winds that peaked at 165 mph.
Residents in the storm's path shared harrowing video on social media Sunday as winds ripped apart entire neighborhoods. One person posted footage of what appeared to be an uprooted metal guardrail wrapped around a tree, while others shared videos of large poles and street lights twisting in the wind.
"I need prayers tornado just destroyed my house," one Twitter user wrote.
"Debris is just everywhere … parts to people's houses, random mattress in our driveway, trees down everywhere I can look, power lines down everywhere," another user added.
More than 150 first responders were on the ground in the moments after the storm, according to the Lee County Emergency Management Agency.
East Alabama Medical Center said it has received more than 40 patients injured in the tornadoes and more are expected to arrive. Some of the patients have been sent to surrounding hospitals.
Alabama Gov. Kay Ivey extended a previous state of emergency declaration in the wake of the severe weather.
"Our hearts go out to those who lost their lives in the storms that hit Lee County today," Ivey wrote on Twitter on Sunday evening.
An average of 80 people die annually from tornadoes in the United States, although just 10 died in 2018, according to data from the National Weather Service.