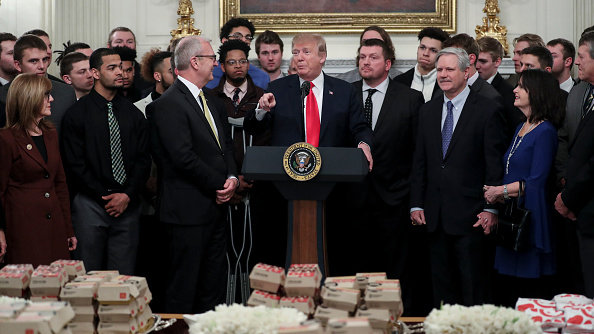 Oliver Contreras-Pool/Getty Images(WASHINGTON) — After serving fast food to the Clemson Tigers in January, President Donald Trump greeted another team of champion athletes with McDonald's Big Macs and Chick-fil-A sandwiches at an event Monday.
The North Dakota State football team joined the president at the White House for a celebration Monday of their seventh national title in eight years.
"We could have had chefs — we could have — but we got fast food," Trump said at the event. "I know you people very well."
Trump made some brief comments and the Bisons presented him with a jersey that had his name and the number 45 on the back. They then ate lunch.
At the time of the Clemson event, White House press secretary Sarah Sanders attributed the decision to serve fast food, at least in part, to the fact that the White House catering staff had been furloughed without pay.
"Because the Democrats refuse to negotiate on border security, much of the residence staff at the White House is furloughed — so the President is personally paying for the event to be catered with some of everyone’s favorite fast foods," Sanders said in a statement at the time.