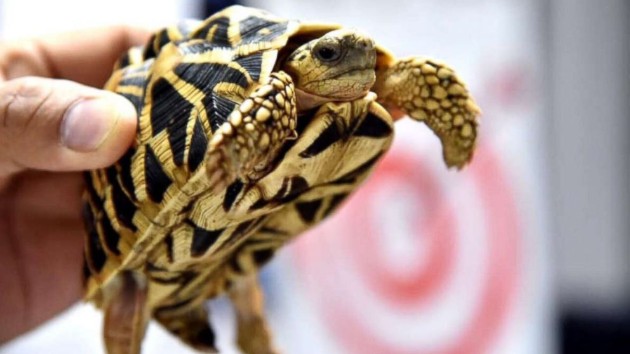 Bureau of Customs NAIA/Facebook
Posted on March 4, 2019 by ABC News

Bureau of Customs NAIA/Facebook(LONDON) — Over 1,500 exotic turtles and tortoises that were being smuggled into the Philippines' main airport were intercepted by authorities on Sunday, Philippine customs said.
The 1,529 animals, all of which were found to be alive after four abandoned suitcases containing the animals were discovered, were believed to be worth around $86,000 (4.5 million pesos), the Bureau of Customs at Ninoy Aquino International Airport (NAIA) in Manila said in a statement.
A passenger, who the authorities said was a Filipino national, abandoned the animals in four items of luggage in the arrivals area before security checks, after arriving at Manila on a flight from Hong Kong.
"The passenger may have been informed of the vigilance of Bureau of Customs against illegal wildlife trade and its penalties," the Bureau of Customs NAIA announced in the statement, which was posted on Facebook.
A number of different breeds were discovered among the turtles and tortoises, including Star Tortoises, Redfoot Tortoises, Sulcata Tortoises and Red-eared Slider turtles.
The illegal trade of wildlife carries strict penalties in the Philippines. Violators face fines up to 200,000 pesos ($4,000) and two years in prison under the country's Wildlife Resources Conservation and Protection Act.
In their announcement, the Bureau of Customs NAIA released a series of photos of the smuggled turtles, some of which had been bound in duct tape.
"BOC NAIA will continuously protect the borders against importation and exportation of illegal wildlife trade and other prohibited and anti-social goods," the bureau said.
All of the animals were turned over to the Wildlife Traffic Monitoring Unit of the Philippines Department on Natural Resources, the Bureau of Customs PH said.