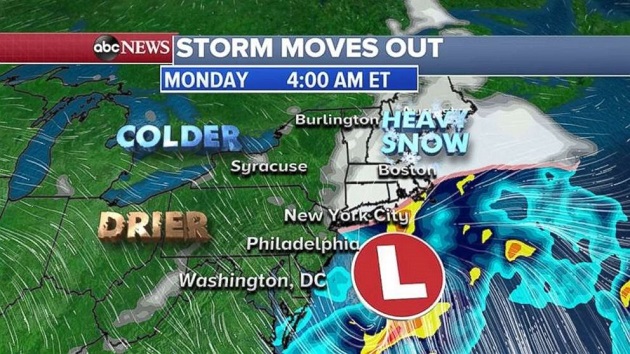 ABC News(NEW YORK) — As tornadoes in Alabama killed at least 23 people, much of the U.S. was buried in snow.
Thirty-six tornadoes across four states were reported as 107 total damaging storms were reported from Lousianna to Virginia, as heavy snow fell in Colorado, Kansas and Nebraska out West. Maryland, Connecticut, New Jersey, New York, Pennsylvania and Massachusetts all saw at least 6 inches — with many getting several inches more.
Following that storm is a blast of Arctic air, pushing lows in the upper Midwest to well below zero. Minneapolis on Sunday had a low of minus 13 and a high of zero, the city's coldest March day since 1962.
Snow should end in New England around 11 a.m. Monday as that storm finally shoves off into the Atlantic Ocean.
Monday afternoon will be sunny and windy for much of that region, although Monday night it should be much colder.
Wind chills Monday and Tuesday, especially in the Midwest, will be extremely low — Chicago will experience a minus 21 Monday morning as New York City and Boston hover around zero on Tuesday.