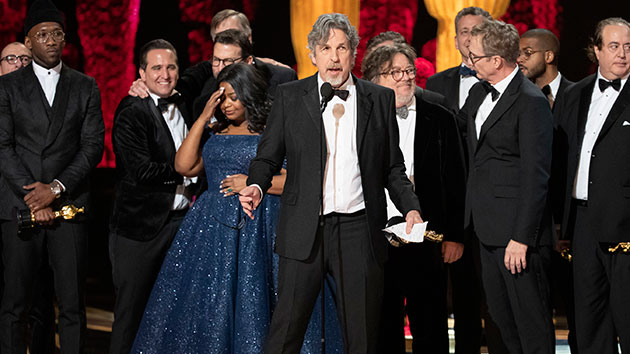 Writer/director Peter Farrelly accepts the Best Picture Academy Award for "Green Book"; ABC/Craig Sjodin(LOS ANGELES) — Its Best Picture win was a surprise to many at last month's Academy Awards, and now Green Book's Oscar-night gold has turned to green — at the box office.

In fact, the dramedy's $4.7 million take over the weekend represents the biggest post-Oscars bump in eight years, Billboard notes. Not since the King's Speech in 2011 has a Best Picture winner seen such a jump, according to the trade.

In fact, Green Book didn't make the top 10 in the box office during the weekend of the Oscars, but this past weekend, its $4.7 million take landed it at #5 on the list.

The movie is also scoring overseas, with this past weekend adding nearly $32 million to the till, for a to-date global total of $112.1 million. Interestingly, Billboard points out, the movie about the unlikely friendship between an Italian-American from New York City and the African-American musician he escorts through the segregated South in the 1960s, had $17.1 million debut…in China.

No big gatherings for Saint Patrick’s Day in Boston: ‘We are so close to a finish line’
Clearfield County Bookmobile schedule for March
ABC News’ Linsey Davis on “savoring” special moments of motherhood with her third children’s book, ‘Stay This Way Forever’
Shaq names his ideal ‘Big 3,’ talks new ad, NBA predictions
And Just Like That… Chris Noth hints Mr. Big could be heading to the ‘Sex and the City’ reboot
Rutgers President Releases New Book, “The Cause of Freedom”