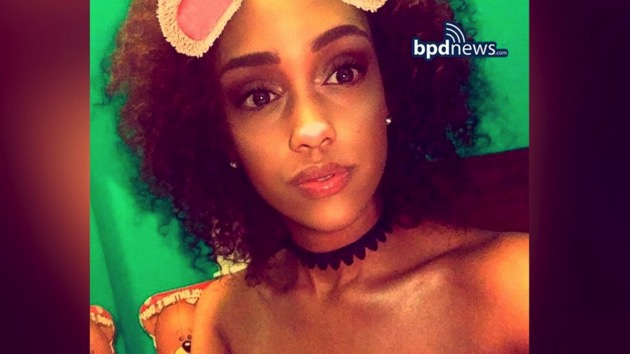 Released by Boston Police
Posted on March 4, 2019 by ABC News

Released by Boston Police(BOSTON) — The body of Jassy Correia, a young mom, who police said was killed after leaving a Boston nightclub, was found bound, bruised and naked in her suspected kidnapper's car, according to federal prosecutors.
When suspect Louis Coleman III was pulled over in Delaware on Thursday, police asked if anyone else was in the car, and Coleman allegedly said, "'she's in the trunk,' or words to that effect," U.S. Attorney Andrew Lelling told reporters on Sunday.
In the trunk was a body wrapped in a sofa cushion cover, that was inside a trash bag placed inside a suitcase, said Lelling. The body was covered with what's believed to be baking soda, Lelling said.
Correia, 23, appeared to die from blunt force trauma and strangulation — there's no indication that she was sexually assaulted, Lelling said.
"It appears she put up a struggle," Lelling said.
Coleman, 32, is charged with federal interstate kidnapping resulting in death, which carries a mandatory life sentence and is also death penalty eligible, Lelling said. He is expected to appear in court on Monday.
Correia, a mother of a two-year-old daughter, was kidnapped early Sunday after leaving Venu Nightclub, where she was celebrating her birthday with friends, authorities said.
Cameras showed Coleman arriving at his Providence, Rhode Island, apartment building Sunday morning and carrying a body from his car to his apartment, Lelling said. Video also showed Coleman leaving his apartment with a suitcase, that he hoisted into the trunk, Lelling said.
Coleman bought duct tape, electrical tape, a mask, surgical gloves, safety goggles and bleach at a Walmart, according to Lelling.
It appears Coleman did not know Correia, Lelling said.
Suffolk County District Attorney Rachael Rollins told reporters on Friday that Correia "was right where every woman has every right to be — celebrating her birthday on a night out with friends."
"Let's not fall into a discussion about whether we should walk home alone or how many people we should call when we're leaving the club," Rollins said. "If anything, let's remind the men in our lives that violence against women isn't a women's issue — it's a problem that men take responsibility for in their lives."
Copyright © 2019, ABC Radio. All rights reserved.

Disney California Adventure Park details ‘A Touch of Disney’ experience opening March 18
Marvel movie baddie Frank Grillo on his work ethic, and his “crazy, real” movie ‘Body Brokers’
Independent report into deadly police encounter with Elijah McClain to be released
Bodies of Strattanville crash victims, missing Clarion U student found
Allison Janney reflects on eight seasons of ‘Mom’ as “one of the great honors of my life”
Mom of 5 ‘inadvertently’ shot dead after kids find gun in her purse: Police