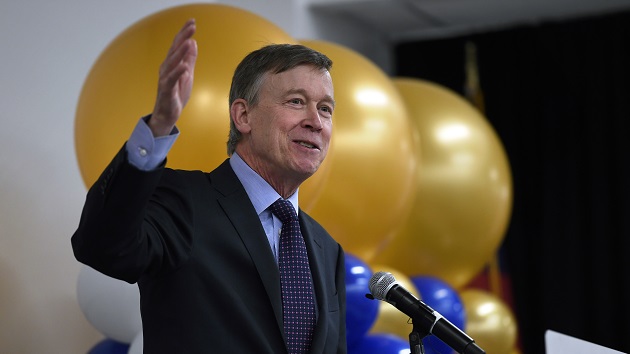 Joe Amon/The Denver Post via Getty Images(WASHINGTON) — John Hickenlooper, the former governor of Colorado, launched a bid for the Democratic presidential nomination Monday morning, touting a diverse and winding professional background that he said puts him in a unique position to solve the nation's political divisions.
Hickenlooper's announcement came in a campaign video in which the 67-year-old outlined his path from laid-off geologist to brewpub owner to Denver mayor, eventually making his way to the governor's office.
Looking ahead to a presidential campaign, the Democrat positions himself as a candidate with both substantial ideas and a record of bipartisan accomplishments that still moved Colorado toward the political left.
"I'm running for president because we need dreamers in Washington, but we also need to get things done," Hickenlooper says in the video. "I've proven again and again I can bring people together to produce the progressive change Washington has failed to deliver."

Under Hickenlooper's leadership, Colorado emerged as one of the nation's preeminent progressive breeding grounds over the last decade, transforming from a western bastion of social conservative values into a leader on health care reform, environmental protections and marijuana decriminalization, all while nurturing one of the nation's strongest state economies.

In an interview on ABC's Good Morning America Monday, Hickenlooper described the U.S. as being in "a crisis of division" that is the worst since the Civil War — one which was preventing the government from addressing more pertinent issues like climate change and health care costs. Part of the former governor's pitch to voters, he said, is that he has a history of accomplishments in a state with a divided legislature.
"I think I'm really the one candidate out there that has a very strong record of bringing people together and getting things done," Hickenlooper said. "We got the oil and gas industry to work with the environment community to create methane regulations… we're a purple state that got universal background checks passed."

Colorado, which voted for Republicans in nine of 10 presidential elections from 1968 through 2004, has since sided with Democrats in the last three and sent three consecutive members of the party to the governor's office. The state's Class 2 senator, Republican Cory Gardner, is considered to be one of the most-endangered incumbents in 2020, should he choose to run for re-election. Hickenlooper himself withstood sweeping Republican inroads during the 2014 midterms when he was re-elected, later meeting with Hillary Clinton during her 2016 search for a running mate.
With a wink to a line from former President Barack Obama's famous 2004 Democratic National Convention speech, Hickenlooper described, in his campaign video, his youth "as a skinny kid with Coke-bottle glasses and a funny last name" and his ability to withstand "bullies."
"Standing tall when it matters is one of the things that really drives me," Hickenlooper said, describing the nation as in a "crisis that threatens everything we stand for" — a voice-over he delivers on top of images of President Donald Trump.
On Good Morning America, Hickenlooper described beating Trump as "essential" but not "sufficient" on its own, indicating that Democrats needed both a vision and pragmatic plan to execute it should they find themselves in control of the White House.
"One thing I've shown I can do, again and again, is create teams of amazingly talented people and really address these issues that are the critical issues facing this country," he said.
In addition to Hickenlooper's navigating of his career, his campaign video cites the challenges of responding to droughts, wildfires, floods and the 2012 Aurora, Colorado, movie theater shooting as pivotal moments during his gubernatorial term that prompted concrete action, including emissions standards and gun control laws.

Despite being labeled as a moderate within the Democratic presidential field, the former governor maintained that these successes demonstrated an ability to "achieve progressive goals."
"I'm not sure what other states have done that," Hickenlooper said on Good Morning America.
The former governor's candidacy makes him the 14th high-profile Democrat to enter the race, and the second with gubernatorial experience, following Washington Gov. Jay Inslee's kick-off on Friday.
Hickenlooper's tenure as mayor of Denver, the burgeoning hub of the nation's 19th-largest metropolitan area, further continues a 2020 trend in which a number of one-time city leaders — including South Bend, Indiana, Mayor Pete Buttigieg, Sens. Cory Booker, D-N.J, and Bernie Sanders, I-Vt., and former Housing and Urban Development Secretary Julian Castro — are using their city hall leadership as a bullet point on their presidential resumes.
Hickenlooper was a political novice in 2003 when he parlayed the success of his Wynkoop Brewing Company, and subsequent community advocacy in the revitalized Denver neighborhood in which it was founded, into a dark horse mayoral victory. His achievements in the city included eliminating a $70 million budget deficit and attracting the 2008 Democratic National Convention.
In the wake of his announcement, and following his appearance on Good Morning America Monday morning, Hickenlooper will appear at a send-off event in Denver on Thursday. He'll then travel to Iowa Friday for two days of events in the nation's first caucus state and visit Austin, Texas, Sunday for South by Southwest, at which several other presidential candidates also are expected to appear.