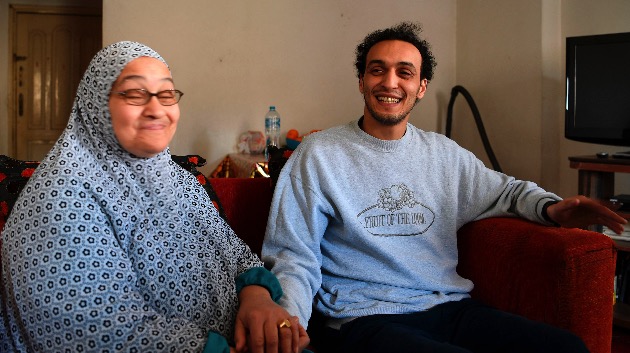 KHALED DESOUKI/AFP/Getty Images(CAIRO, Egypt) — Well-known photojournalist Mohamed Abu Zeid was released from prison in Egypt on Monday after more than five years of detention. Abu Zeid, widely known under the name Shawkan, was arrested in August 2013 while taking pictures of the forceful dispersal of a sit-in protest by supporters of Egypt's ousted president, Mohamed Morsi.
Along with hundreds of others, Shawkan faced charges that included vandalism and belonging to an outlawed group. He remained in pre-trial detention for five years, until he was sentenced to five years in prison last September.
"We are relieved to hear that Shawkan is finally free after spending over five years in jail and call on authorities to end their shameful treatment of this photojournalist by removing any conditions to his release," the Committee to Protect Journalists' Middle East and North Africa program coordinator, Sherif Mansour, said.
ABC News was unable to reach Shawkan for comment.
Shawkan’s release is conditioned on probation that would require him to spend the hours of 6 p.m. to 6 a.m. every day at a police station for the next five years. His lawyers plan to appeal for the probation to be lifted, according to CPJ.
Photos shared on Twitter following his release show Shawkan smiling at his family home in Giza.
In one photo he poses with his now-famous gesture of mimicking holding a camera in his empty hands, in reference to a photo of him that went viral, where he stood behind bars pretending to take pictures.
Shawkan is a recipient of CPJ's International Press Freedom Award and the UNESCO/Guillermo Cano Press Freedom Prize.
The government of Egyptian President Abdel-Fattah el-Sissi has been accused of cracking down on journalists and barring freedom of speech.
There are more than 30 Egyptian journalists detained in the country, according to a January report by Reporters Without Borders, a NGO that advocates on issues relating to freedom of information and freedom of the press.
Copyright © 2019, ABC Radio. All rights reserved.