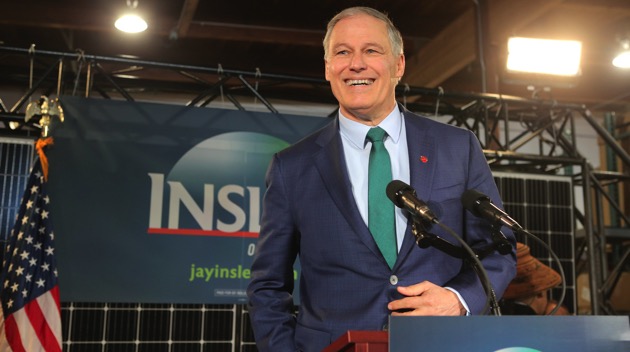 Karen Ducey/Getty Images(NEW YORK) — Following up on his official entrance into the 2020 presidential race, Washington state Gov. Jay Inslee on Monday used an appearance on ABC's The View to stress his main campaign theme: that climate change should be the "number one priority" for America's next commander in chief.
"America is going to defeat climate change. It is our destiny and we will do this, and I'm convinced of this," Inslee, a Democrat, said. "But to do this, we have to have a leader who will say fundamentally and unequivocally that this is the number one priority in the United States."

Gov. Jay Inslee to @TheView: "The reason, fundamentally, I'm running, is because we need a president who will say this: America is going to defeat climate change." https://t.co/Iz5i2YfmEk pic.twitter.com/X8d4e0loZv

Inslee also responded to criticism from President Donald Trump and many in the Republican Party who say the costs of combating climate change are not worth the benefits, and that focusing on an issue that many Americans do not rank among the most important to them is a mistake.
"When Donald Trump said that we're not going to have toasters and TVs if we have wind power, that's just simply moronic is the best way I could say it," Inslee said after Trump criticized the Green New Deal proposal put forth last month by Democratic Sen. Ed Markey of Massachusetts and Rep. Alexandria Ocasio-Cortez of New York. "He is just such a pessimist and a narrow-minded thinker, he needs to get with the rest of Americans and understand that a country that sent a man to the moon can develop a green energy economy."
Inslee dismissed criticism of the cost of the Green New Deal, likening it to Republican claims that Democrats were going to institute "death panels," during the debate prior to the passage of the Affordable Care Act.
"We are not going to eliminate cars. We are not going to eliminate trains … When we think about our opportunities here, we can't be so narrow-minded. Look, I grew up in the time of rotary phones and now we got cell phones. We are going to have the greatest transformation of our economy if we unleash this potential," Inslee said.
Inslee, who officially launched his campaign last Friday, was the first governor to enter a growing Democratic field of contenders that includes six U.S. senators, and as of Monday morning has swelled to 14 candidates total with the entrance of former Colorado Governor John Hickenlooper.
"We went to the moon, and created technologies that have changed the world," Inslee said in his announcement video posted Friday. "Our country's next mission must be to rise up to the most urgent challenge of our time: defeating climate change."

VIDEO: This is our moment, our climate, our mission — together, we can defeat climate change. That's why I'm running for president. Join #OurClimateMoment today https://t.co/zg8ILGyk0Z pic.twitter.com/pUZVxyzfc5

Inslee, 68, spent 2018 as the chair of the Democratic Governors Association, helping the party flip seven seats from red to blue and raising his national profile as an antagonist to President Donald Trump. During an event last year at the White House, Inslee called out the president over a proposal to arm teachers in the wake of the mass shooting at Marjory Stoneman Douglas High School in Parkland, Fla.
"I just suggest we need a little less tweeting here, a little more listening," Inslee said at the time.
Inslee said he is "comfortable" confronting Trump on a host of issues, and hinted that further legal action against the administration may be forthcoming.
"I can think of no higher pleasure than to take on Donald Trump on a big stage. I’ve done it in the White House. I’m the governor who went to the White House and told him he needed to quit tweeting and start listening to Americans. I feel very comfortable in that confrontation," Inslee told ABC News in an interview following his campaign launch on Friday.
Inslee heads to Iowa on Tuesday, where he will host a number of green energy events during his first trip to the state as a presidential candidate.
Copyright © 2019, ABC Radio. All rights reserved.