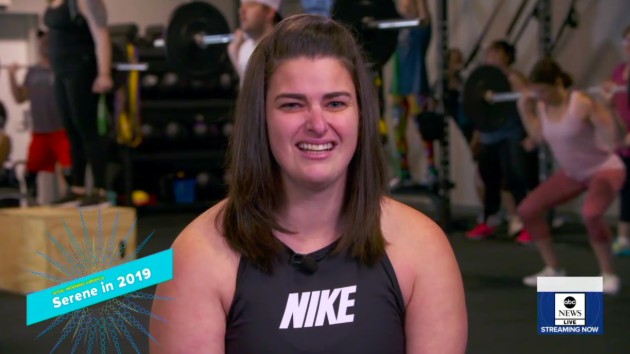 Below, Hammerman writes in her own words about how she learned to flex and grow optimism, which she calls "a muscle that gets stronger with use."
From the moment I took my first breath it was obvious that the blue prints for my life were going to be different. My family would soon learn that their twin miracle babies would have to take two completely different paths in life.
I was diagnosed with cerebral palsy very early on, which probably sounded like a death sentence 29 years ago. My family was told I would never walk, talk, read or write! That doesn’t sound like much fun.
That was the beginning of me going against the grain. I was not walking or able to move as quickly as my siblings, but at a young age I found my voice and it was the most powerful tool I would ever acquire and something I never take for granted to this day.
Societal perception of people with adaptive needs has changed, but has a long way to go. That’s why I thrive off of achieving the “impossible”. When I was younger and told that I would most likely never do something, that quickly became the catalyst to me finding a way to prove you wrong. Sleep away camp at 7 years old, mainstream schooling, college, a masters degree; you name it, I’ve done it and I’m often asked where I believe my sense of determination and optimism comes from?
My answer is simple: it’s just my personality and who I was meant to be. I like to be challenged and when God made me he knew exactly what he was doing. He may have put a few physical obstacles in my way, but he also set me up with a toolkit for life that would help me conquer any challenge in my way… I just have to want something bad enough. Life will never be easy, but if it was you wouldn’t appreciate the good days.
I remember going to college and becoming the person I am today. People loved me for exactly who I was and respected the knowledge I had as someone with adaptive needs and it was in college when I began to truly advocate for others and myself. At first, I wasn’t sure what I wanted to do. I didn’t really have a direction, but I remember I wasn’t happy with my health that needed to take priority.
I began working with a trainer and he taught me about attaining an “impossible” goal. I remember telling him I wanted to do a marathon and without hesitation he helped me set up a plan of attack.
I didn’t know it at the time, but the numbers 4:34:16 would change my life forever. That was the time I crossed the finish line of my first Hand Cycled marathon and began viewing myself as a competitive athlete.
After many years of hard work, education and determination I became a coach and this new role gave me the opportunity to start changing people’s lives on a larger scale. In the beginning, every day was a challenge, but it made me better. For every mistake I made I learned three times as much, not only about how people move, but about myself and what I am truly capable off.
As each year passes my toolkit for life just gets bigger. In 2016, I was thrown the biggest challenge I’d ever experienced. I was diagnosed with Hodgkin’s Lymphoma Stage 3B.
Let's be honest, I didn’t have time for cancer. I had just found the man of my dreams, wanted to open my own gym and had so many things in life I still wanted/needed to accomplish.
Treatments were intense but my boyfriend Tyler, my friends, family and complete strangers helped me make the best of it.
I was in the longest workout of my life, but I had a goal and just had to complete that goal as fast as I could. I stayed as positive as possible and pushed through.
Seven weeks into 29 weeks of treatment, my doctor looked at me with a smile and said, “I’ve never seen anyone like you before in my life. Your scans have come back completely clean.” Did this lady just tell me my cancer was gone?! Yes, yes she did, but I had to finish the 22 weeks I had left. Poisonous chemicals were saving my life, ironic much? At the end of the day I was forever changed.
Beating cancer reinforced that I am capable of way more than my initial set of blue prints insinuated I would be. I am beyond grateful for every opportunity that comes my way. It is no secret that I have a long list of accomplishments, but I’m far from done. So if you take anything away from this I hope you never forget that failure is not an option. You can do it all.