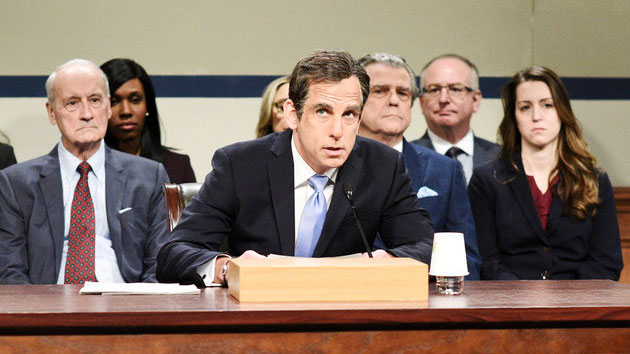 Will Heath/NBC(NEW YORK) — Ben Stiller reprised his role as President Donald Trump's ex-lawyer Michael Cohen in this week's Saturday Night Live as he testified before Congress, as the real Cohen did last week.

Cohen's appearance in front of the House Oversight Committee on Wednesday elicited a number of meme-worthy moments, so of course SNL couldn't stay away.

Democratic Rep. Elijah Cummings, played by Kenan Thompson, opened the hearing, saying, "For any other president this would be the most damning and humiliating day of their lives, but for Trump this is just Wednesday."

Stiller’s Cohen hemmed and hawed and searched for the speaker throughout his appearance. "The first time I testified was also under oath, but this time, I like, really mean it," he said. "I know that I was wrong. I know it because I got caught."

The real Cohen will be spending three years in jail after pleading guilty to tax evasion, making false statements to a bank, and two felony campaign finance violations tied to payouts for women who accused Trump of affairs, which the president has denied.

"For too many years, I was too loyal to a man that I should not have been," said Stiller as Cohen. "Now I know how Khloe Kardashian feels," referring to the celeb who's been in the news lately in part because her baby daddy cheated on her.

Bill Hader also returned for a cameo as Ohio Republican Rep. Jim Jordan, who introduced himself by saying, "Good afternoon to you, you lying piece of human trash."

The rest of the Democrats on the committee then proceeded to give their time to Jordan, "so he can keep digging his own grave."

Cohen finished his testimony admitting to being a liar and a fool, before being interrupted by Thompson's Cummings.

Biden’s first 100 days live updates: Biden says ‘no time to waste’ on COVID relief bill
Michael Cudlitz on getting to know his character, and escaping COVID, with ‘Clarice’
Mariska Hargitay says it was “life-changing” when she met ‘SVU’ co star Chris Meloni for the first time
Trump’s tax returns given to Manhattan prosecutors
“I didn’t have a problem with the way we were doing it” — ‘Simpsons’ creator Matt Groening responds to racial casting flap
Michael B. Jordan admits Chadwick Boseman’s death is what “made me cry the most this year”