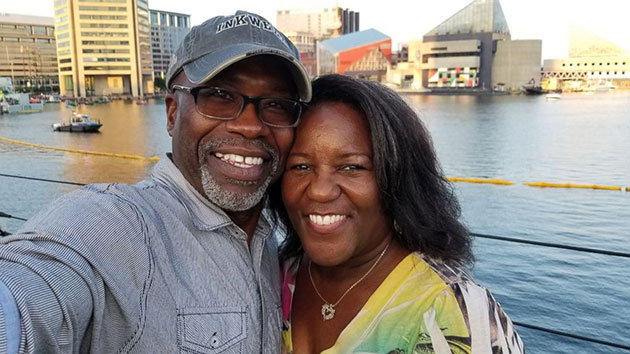 Courtesy Keith Smith(BALTIMORE) — The killing of a Baltimore woman took a stunning twist Sunday when her husband and stepdaughter were arrested on murder charges, two months after they claimed a black man panhandling with a woman and a baby stabbed her when she gave them money.

Jacquelyn Smith, 54, was stabbed to death just after midnight on Dec. 1 in the Johnson Square neighborhood of East Baltimore, police said.

Her husband, Keith Smith, called 911 and later told police that he and his wife, along with his daughter, Valeria Smith, were driving when they saw a woman standing on the side of the road, carrying what looked like a baby wrapped in a blanket. They said she was holding a sign that read, "Help me feed my baby, God Bless."

Keith Smith said they pulled over and his wife rolled down the window to hand the woman $10.

He told ABC News that he noticed a man standing next to the panhandling woman. But it never crossed his mind that he and his wife were being set up, he said in an interview after the killing.

"She was trying to help someone out," Keith Smith told ABC News just days after he said his wife was stabbed in front of him and Valeria Smith, who were out with celebrating her 28th birthday when the tragedy unfolded.

However, after a lengthy investigation, Baltimore Police allege it was Keith Smith, along with his daughter, who were responsible for Jacquelyn Smith's murder.

The pair was arrested near the U.S.-Mexico border in Harlingen, Texas, and now face charges of first-degree murder, police said at a news conference Sunday. Investigators learned Keith Smith was leaving Maryland and coordinated with the Texas State Police to take him into custody Sunday morning.

Police would not comment on how they determined Keith and Valeria Smith were responsible for the death, citing an ongoing investigation.

In an interview with ABC News shortly after his wife's death, Keith Smith described what he told police happened that day and how saddened he was that his wife was taken over a few dollars.

Jacquelyn Smith, her husband and daughter were driving home when Jacquelyn Smith spotted the woman standing in the drizzling, cold weather and the holding what she thought was a baby, according to Keith Smith.

The family pulled over to help, Keith Smith said.

He said the female panhandler reached into the car, grabbed his wife's purse and scurried off into the darkness.

"For most people, the last thing you're going to think about is that this person is about to take your life for a few dollars," Keith Smith said.

"I think the reality is, we forget about the times that we're living in," he said. "You may have the best intentions on helping this person, but when you let a person get into your safe zone, you're actually opening yourself up to whatever this person has intended for you."

Two days after the fatal stabbing, Keith Smith and his daughter returned to the scene of the killing with then Baltimore interim Police Commissioner Gary Tuggle for a news conference, in which Tuggle asked the public to help investigators identify the two suspect.

At the time, Tuggle said it appeared the two panhandlers were working together.

"They're using this ruse as panhandlers to get the attention of their would-be victims," Tuggle said at the time. "We also want to caution the public about engaging with panhandlers in recognizing the fact not all of them have honest intent. Not all of them are in real need."

Jacquelyn Smith worked as an electrical engineer at the Aberdeen Proving Ground, an Army facility in Aberdeen, Maryland, her husband said. He said he and his wife are members of the Helping Hands Ministries Church in the Baltimore suburb of Churchville, where Jacquelyn's memorial service was held on Dec. 7.