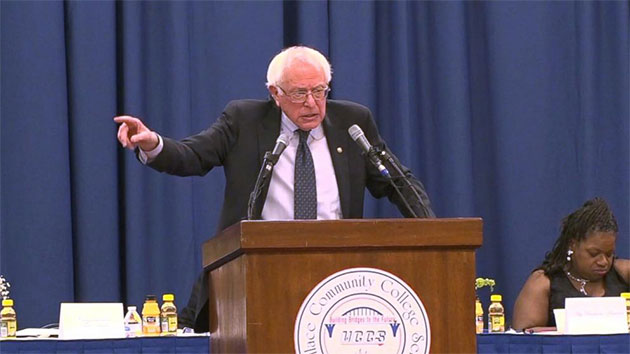 ABC News(SELMA, Ala.) — Former presidential nominee Hillary Clinton came face to face with the next batch of presidential hopefuls Sunday as several prominent Democrats traveled to Selma, Alabama, to commemorate “Bloody Sunday,” the 1965 civil rights march in which demonstrators were beaten and tear gassed by police as they attempted to cross the Edmund Pettus Bridge.

Clinton, a former senator and secretary of state, was honored with the 2019 International Unity Award at the Martin and Coretta King Unity Breakfast during the Selma Bridge Crossing Jubilee, an annual event.

At the breakfast, even while the 2020 election continued to ramp up, frustration over the 2016 election lingered. Some attendees wore 2016 Hilary Clinton buttons, and more than a dozen people rose from their seats with roaring applause after Alabama legislator Henry Sanders said the election was “stolen from her by the FBI who issued that report.”

Clinton opened her remarks by saying that the “fight for women’s rights, civil rights and human rights is the unfinished business in this century.”

While she didn’t mention President Donald Trump by name, Clinton used strong words against his administration.

“We are living through a full-fledged crisis in our democracy,” Clinton said.

She added that it’s clear the country has a lot of work to do “when racist and white supremacist views are lifted up in the media and in the White House. When hard-fought-for civil rights are being stripped back.”

On the weekend honoring the people who were beaten 50 years ago protesting black voter discrimination, Clinton argued that the right to vote is still a current and pressing civil rights issue.

“We know candidates both black and white have lost their races because they have been deprived of the votes they otherwise would have gotten,” Clinton said.

The clearest example, she said is just next door in Georgia.

“Stacy Abrams should be [the] governor leading that state right now,” she said adding that North Carolina is facing one the most “brazen schemes of voter fraud.”

“Something is wrong when one party is systematically and deliberately trying to stop trying to stop millions of Americans from voting,” Clinton added.

Looking ahead to 2020, Clinton ended her speech by noting the number of women running for president.

“There’s not just one woman running for president, there’s enough to field a basketball team,” she said.

Sunday’s breakfast was a coming together for Democratic presidential campaigns — both old and new.

Sen. Bernie Sanders, who challenged Clinton for the Democratic ticket in 2016 and is now ramping up another presidential campaign, attended the breakfast honoring her.

He spoke briefly and congratulated Clinton on her award, as well as calling for automatic voter registration.

However, just days prior, Sanders said he wasn’t interested in taking advice from Clinton, his former rival.

"Hillary and I have fundamental differences," he said during an appearance on “The View” on Friday.

For her part, Clinton has shared strong words about Sanders in the past, even after he eventually endorsed her for the Democratic nomination for the 2016 race.

"His attacks caused lasting damage, making it harder to unify progressives in the general election and paving the way for Trump's 'Crooked Hillary' campaign," she wrote in "What Happened," her book about her failed bid for the presidency.

Sen. Cory Booker, a democratic hopeful also eyeing the 2020 presidential nomination also gave brief remarks at the breakfast, touching on a range of issues from gun violence to clean water to healthcare.

“I worry now that we are at a point in our country where we see a moral vandalism that is attacking our ideals and beliefs and eroding the dream of our nation,” Booker said.

Former Housing Secretary Julian Castro was scheduled to appear at the event, but an organizer told ABC News he canceled a few days prior.

Sen. Sherrod Brown, who is still deciding whether to run for president, also addressed the breakfast, and went into detail about each of his five trips to Selma.

Brown told ABC News he plans to announce whether or not he will run by the end of March. As he travels to meet voters around the country, he is brushing shoulders with the people he would be running against.

“Bernie, Cory and I were on the same plane,” he said, adding his wife was talking to Sen. Sanders as they waited to get their luggage.

Brown added that Democrats were feeling a sense of unity.

“We like each other and have respect for each other,” he said.

Even though breakfast attendees on Sunday were able to hear from multiple candidates in one setting, some didn’t feel like their messages resonated.

Dr. Mae Christian took part in the Bloody Sunday march more than 50 years ago. She said she wasn’t too impressed by any of the candidates.

“I need to find out what these people’s issues are,” she said. “We should have had a place where we came up with resolutions,” adding that she was still undecided on who to vote for.

“Everyone runs to Selma to take photos, to do the photo ops,” Tamika Mallory, an activist and co-president of the Women’s March, told ABC News at a panel discussion in Selma on Saturday.

“Don’t just cross the bridge but go do the actual work on behalf of those people who gave their lives in order for us to have the right to vote.”

A year of COVID-19: What was going on in the US in March 2020
Capitol on high alert but quiet amid March 4 threat
NSC: Motor vehicle deaths up in 2020, despite fewer people on roads amid pandemic
March is Red Cross Month
Capitol Police officials say intel on possible March 4 plot being taken ‘seriously’
Capitol Police beef up security for March 4 amid concerns over QAnon theory