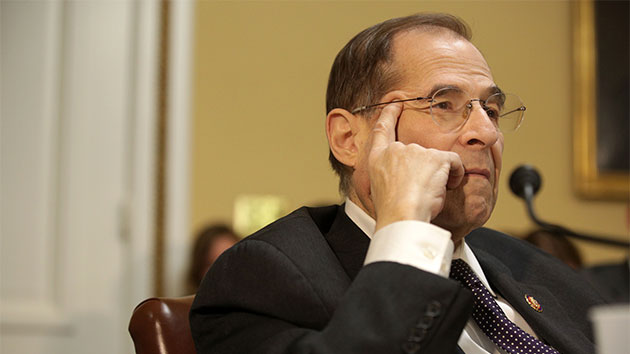 Alex Wong/Getty Images(NEW YORK) — The top Democrat on the House Judiciary Committee said that the American people and Congress “are entitled to know” the underlying evidence in special counsel Robert Mueller’s investigation.

“The Justice Department has made clear in the last few weeks that it may hide from the American people the conclusions of the Mueller investigation," Rep. Jerrold Nadler, D-N.Y., said on “This Week” Sunday. "We will fight to make that public.

Mueller has been looking into Russian interference in the 2016 presidential election, including whether anyone associated with the Trump campaign may have coordinated efforts with Russian operatives.

In an interview a week prior on “This Week”, Chairman of the House Intelligence Committee Rep. Adam Schiff, D-Calif., said his committee would subpoena Mueller’s final report and even call him to testify before the committee if the report was not made public. Schiff also said that he was “absolutely” prepared to sue the Trump administration, if necessary.

On “This Week” Sunday, Nadler said that the Department of Justice has said that “the normal policy that you don’t comment on the conduct of people who are not indicted will prevail.

“And that should normally prevail, but not when you say the president cannot be indicted because he’s the president, that turns it into a cover up.”

In the February interview on “This Week,” Schiff argued that the department has “violated that policy” over the last two years, and said it established a new precedent when it “turned over thousands and thousands of pages of discovery in the Clinton email investigation, and there was no indictment in that investigation.”

The House Intelligence Committee chairman added that in addition to that precedent, the “intense public need to know,” with regard to Mueller’s findings, “overrides any other consideration.”

Nadler said that if the Justice Department doesn’t release the “evidence of [Trump’s] crimes, if any, to the public,” the department is saying that “the president cannot be held accountable.”

“So you’ll sue in that case?” Stephanopoulos asked.

“We will subpoena, we will — we will do whatever we have to do,” Nadler said.

Stephanopoulos also asked what Nadler would do if Mueller finished his investigation and said he found no evidence of collusion between the Trump campaign and Russia.

“Is that a conclusion you’ll accept?” he asked.

“Well, we’d want to see the evidence behind that and see the validity of that, and we can agree to disagree,” the House Judiciary Committee chairman said. “But this investigation goes far beyond collusion.”

“All this has to be looked at and the facts laid out to the American people.”

VaccineFinder tool aims to help Americans locate available COVID-19 vaccines
More Americans say they plan to get COVID-19 vaccine as soon as possible: Poll
House passes bill that would prohibit discrimination against LGBTQ Americans after days of heated debate
A third stimulus check could be coming. Here’s what Americans did with the others
More Americans identify as LGBT than ever before: Poll
California commits $1.4 million to combat ‘horrific’ attacks on Asian Americans