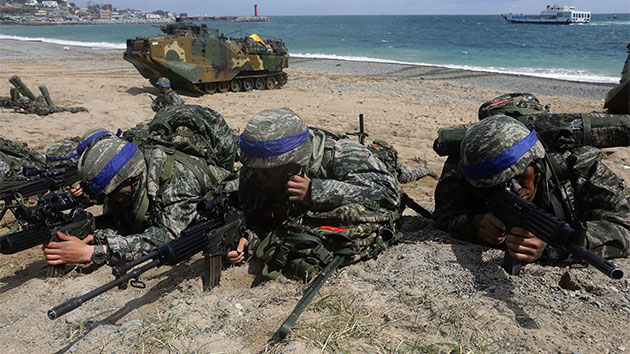 Chung Sung-Jun/Getty Images(WASHINGTON) — Seeking to give diplomatic efforts to denuclearize North Korea more of a chance, the U.S. and South Korea have decided to stop holding the large-scale annual spring exercises that have irritated North Korea in the past. Instead, replacing them with smaller-scale exercises intended to maintain the readiness of U.S. and South Korean troops on the Korean Peninsula.

"The Secretary and Minister reviewed and approved the Alliance decisions recommended by the Commander of U.S. Forces Korea and the Republic of Korea Joint Chiefs of Staff on the combined exercise and training program," said a Pentagon statement reading during their phone call. "Following close coordination, both sides decided to conclude the KEY RESOLVE and FOAL EAGLE series of exercises."

"The Minister and Secretary made clear that the Alliance decision to adapt our training program reflected our desire to reduce tension and support our diplomatic efforts to achieve complete denuclearization of the Korean Peninsula in a final, fully verified manner," the statement said.

On Sunday afternoon, President Donald Trump tweeted said he put a halt to the exercises to "save hundreds of millions of dollars for the U.S. for which we are not reimbursed."

"That was my position long before I became President," he said. "Also, reducing tensions with North Korea at this time is a good thing!"

The reason I do not want military drills with South Korea is to save hundreds of millions of dollars for the U.S. for which we are not reimbursed. That was my position long before I became President. Also, reducing tensions with North Korea at this time is a good thing!

Every spring for two months the U.S. and South Korea held multiple combat exercises throughout the Korean Peninsula involving tens of thousands of ground, sea and air forces from both countries under the umbrella name "Foal Eagle."

A separate exercise known as "Key Resolve" was a computer simulation for commanders and their staffs. Both exercises simulated a joint U.S. and South Korean response to a North Korean invasion.

Both exercises also served as shows of force to remind North Korea of the American military commitment to defend South Korea.

Not surprisingly, the annual exercises consistently riled North Korea which often issued inflammatory statements describing them as provocative. At times North Korea would respond with military shows of force of its own — carrying out ballistic missiles that heightened tensions.

U.S. officials said holding the new exercises at lower command levels will allow both the U.S. and South Korean militaries to maintain their readiness — though possibly not at the same levels as if the larger exercises had been held.

Following the Trump-Kim summit in Singapore last June, President Trump announced the cancellation of "war games" he felt were too costly and "provocative." That decision led to the suspension of the annual Ulchi Freedom Guardian exercise held every August.

NBC News first reported the planned end to the exercises on Friday.

President Trump’s meeting with North Korea’s Kim Jong Un did not result in an agreement to get rid of North Korea’s nuclear weapons program, but the decision to end the exercises this spring indicates the U. S. and South Korea want to continue giving those talks as much diplomatic space as possible.

Annual border arrests hit record high despite trending down in recent months
Biden admin backs down on tracking bank accounts with over $600 annual transactions
Evangeline Lilly says South of Heaven showcases the dark side of Jason Sudeikis
Maple Ave in DuBois likely to be paved this spring
Key takeaways from US military leaders on Afghanistan withdrawal
‘Moulin Rouge! The Musical’ ﻿and ﻿’A Christmas Carol’ ﻿win big at 74th annual Tony Awards