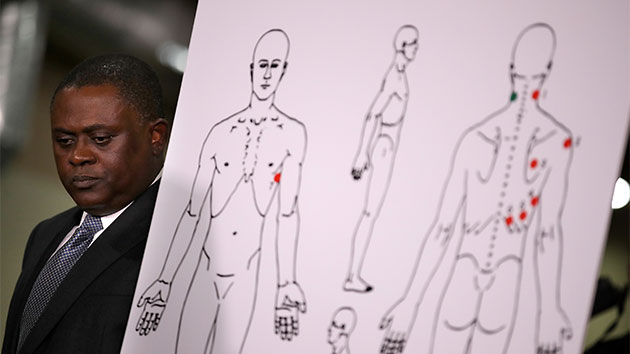 The highly-controversial shooting sparked protests in New York and California and prompted big league sports teams and athletes to weigh in in Clark's defense.

"We look at all these facts and circumstances, we look at everything," Schubert said, following a lengthy address in which she laid out all the reasons for the investigation's conclusions. "We have one question to answer. And that question is was there a crime committed?"

"Was a crime committed? There’s no question that a human being died, but when we follow the law and our ethical responsibility, we will not be not charging these officers with criminal liability for the death of Stephon Clark," Schubert continued, at the end of more than an hour long explanation of the investigation.

"No charges does not diminish the anger, the frustration we heard since the time of his death.”

In a statement released after Schubert's announcement, an attorney for Clark's children blasted the district attorney's office.

"The City has once again failed Stephon Clark, his family and the people of Sacramento," lawyer Brian Panish wrote. "It's unfortunate that justice for Stephon and his family must now be decided and delivered by a civil court."

Panish accused Schubert of "cherry-picking" details to present in the press conference, claiming that Clark was shot multiple times in the back.

Police arrived on the scene after a 911 caller reported someone breaking into cars in the neighborhood. The citizen confronted Clark with a baseball bat, according to Schubert, because he appeared to be breaking into cars, and was believed to have used a cinder block to break the windows. Overhead video shows Clark smashing the windows of three cars, according to Schubert.

Clark was last scene jumping over a fence into a backyard, the 911 caller told police. At the time of the incident, helicopters were in the area and offered to assist, Schubert said.

When police arrived, they searched a nearby yard.

At that point, Clark was seen staring into a sliding glass door where an 89-year-old man was watching television, according to authorities. Clark then smashed the sliding glass door window with what Schubert described as a heavy object and fled into another yard, which Schubert said was later determined to be his grandparents' home.

At the press conference, Schubert disclosed that autopsy results had determined that Clark has alcohol, Xanax, codeine, hydrocodone, and marijuana and cocaine metabolite in his system at the time of the shooting.

Schubert said that police also searched Clark’s cellphone, including his calls, texts, emails, and internet history. They outlined a domestic violence incident he had been involved in two days earlier, and imply that based on Clark’s phone activity he was afraid of going to jail for violating his probation. She said that Clark has conducted internet searches regarding suicide.

One of the officers who shot Clark is black and the other is white, police said — identifying them, respectively, as Terrence Mercadel and Jared Robinet.

Each of the two officers involved in the shooting fired 10 shots, for a total of 20 shots fired, police said. Clark was struck seven times, Schubert said.

Video from a Sacramento Sheriff’s Department helicopter shows Clark running from a neighbor's yard and leaping a fence into his grandmother's property. The deputies in the helicopter can be heard saying the “suspect” had broken a window on the house next door and was checking out another car in the driveway.

Police body-cam videos show the police running down the driveway after Clark and taking cover at the rear edge of the building.

"Show me your hands! Gun, gun, gun!" one of the officers can be heard shouting just before shots rang out.

Schubert detailed the material investigators reviewed before reaching their conclusion not to file charges against the officers. She said investigators reviewed the Sacramento police case file, the California Department of Justice report on the shooting, 911 and dispatch recordings, body camera and helicopter camera video, diagrams and interviews with and recordings of witnesses, a crime lab report, a phone analysis on Clark's phone, and four medical examiners' review of the autopsy.

Clark's shooting has helped lead to proposed state legislation that would prevent police from using deadly force unless if there is no reasonable alternative, such non-lethal force like a stun gun.

"The current 100-year-old standard defining officer involved shootings needs to change," said Mayor Darrell Steinberg. "Today’s announcement only deepens my commitment to changing that long held standard that allows officers to shoot when objectively reasonable … to a clearer set of rules and standards that requires officers to do all they can to prevent a potentially lethal confrontation in the first place."

Kings basketball players honored Clark before their game against the Boston Celtics on March 25, in a unified public service announcement from Kings and Celtics players played on the JumboTron at Gold 1 Center in Sacramento.